20th National Congress of the Chinese Communist Party: What it Means for Europe 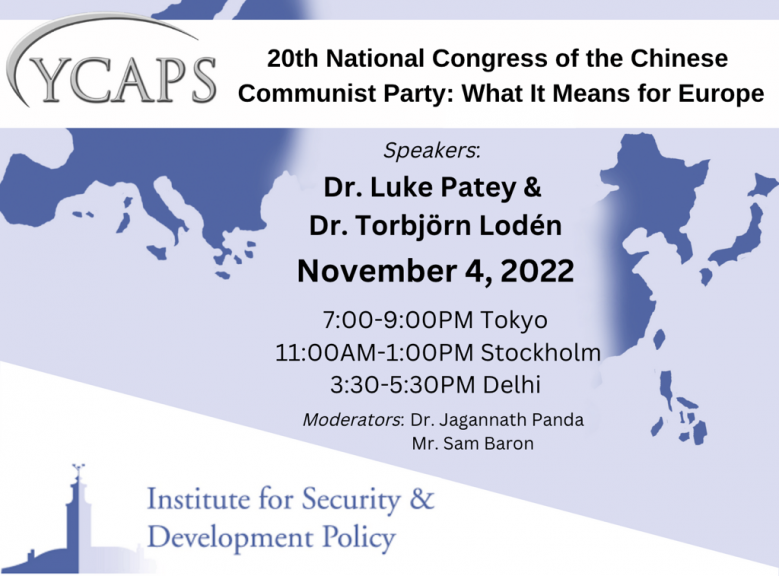 As the world intently scrutinizes the 20th National Congress of the Chinese Communist Party (CCP), its developments and outcomes are of critical importance to world politics. Coming at a critical juncture, the National Congress is poised to have considerable implications for regional and global geopolitics, especially that of Europe.

Russia’s war on Ukraine has greatly complicated the relationship between China and Europe. NATO’s 2022 Strategic Concept reference to China is a strong inference on how the transatlantic approach is not in favor of China. The thoroughly updated 2022 Strategic Concept provided the alliance some much-needed clarity on its overall transatlantic strategy, as well as momentum toward building cohesion around NATO’s principles and values to make it relevant for future security challenges.

In this context, there are several questions that demand further discussion:

In order to delve into some of these questions, YCAPS will be joined by Dr. Luke Patey of the Danish Institute for International Studies, and Dr. Torbjörn Lodén, Head of the China Centre at the Institute for Security and Development Policy, Sweden for a roundtable discussion co-moderated by Dr. Jagannath Panda and Mr. Sam Baron.

This is the inaugural event in the Europe-Asia Webinar Series hosted by YCAPS’ Europe Chapter at the Stockholm Centre for South Asia and Indo-Pacific Affairs (SCSA-IPA) of the Institute for Security and Development in Stockholm, Sweden. This webinar will expand upon the themes discussed during the previous YCAPS webinar about the Congress in the Indo-Pacific Policy Dialogue Series to be held on October 26,2022.

Please use this link to register via Zoom.
You will need the link and passcode provided in the confirmation email

Dr. Luke Patey‘s research focuses on geoeconomics, industrial competitiveness, emerging technologies, and economic coercion and sanctions within Europe-China relations, US-China relations, and the Indo-Pacific region. Patey is author of How China Loses: The Pushback Against Chinese Global Ambitions (Oxford University Press USA, 2021) and The New Kings of Crude: China, India, and the Global Struggle for Oil in Sudan and South Sudan (Hurst, 2014). His writing has appeared in The New York Times, Finan­cial Times, Foreign Policy, Foreign Affairs, The Guardian, and The Hindu. Patey is also Lead Senior Research Fellow at the Oxford Institute for Energy Studies, University of Oxford, where he heads the institute’s Africa research. He has been a vis­it­ing scholar at the United Nations University (Tokyo), the Social Sci­ence Research Coun­cil (New York), Peking Uni­ver­sity (Bei­jing), and Centre d’études et de recherches internationals (Paris). Patey holds a BSc (Hons.) in commerce from Queen’s University (Kingston, Canada) and a MSc and PhD from the Copenhagen Business School.

Webinar Cost: Free of charge
Chair: Dr. Jagannath Panda
Co-Chair: Mr. Sam Baron
Format: This event will be off-the-record. Questions are encouraged. It will not be recorded.
Registration: Required via this link.
Co-Sponsor: Institute for Security and Development Policy (ISDP)