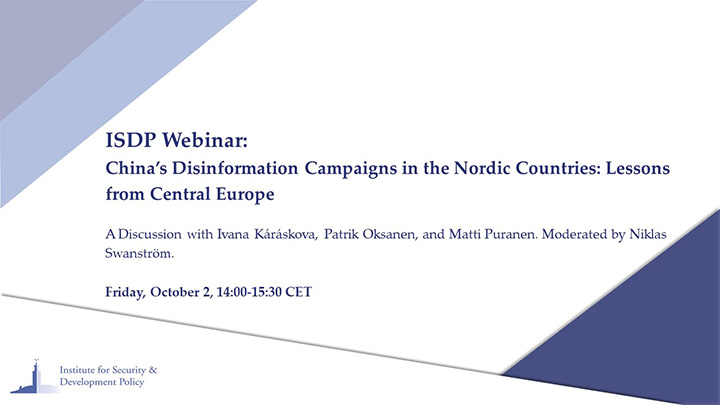 Following the Covid-19 outbreak, China undertook a forceful disinformation campaign in Europe aimed at shifting the narrative from being depicted as the country of the coronavirus’ origin to a global leader in response to the pandemic. Beijing was quick to engage in so-called ‘mask diplomacy’, later criticized as a poorly masked “charm offensive”, whilst simultaneously using targeted social media campaigns to criticize specific countries’ poor handling of the pandemic, attributing the cause of failure to their political systems. However, China’s efforts to shape the narrative seem to only have further strained the already tense relations between China and the EU, and in June, the European Commission further condemned China’s actions in purposefully spreading propaganda and false information related to the coronavirus.

MapInfluenCE, a project run by the Prague-based think tank ‘Association for International Affairs’ (AMO), published a study in August focusing on the developments in China’s disinformation tactics in Central Europe. ISDP is honored to welcome Dr. Ivana Káráskova, one of the authors of the study, the founder and leader of MapInfluenCE, and currently a MERICS European China Policy Fellow, as the main speaker for this webinar. We are also very honored to welcome speakers Mr. Patrik Oksanen, Senior Fellow at the Stockholm Free World Forum, and Mr. Matti Puranen, a doctoral candidate at the University of Jyväskylä. Dr. Káráskova will elaborate on the findings from MapInfluenCE’s study, and will, together with Mr. Oksanen and Mr. Puranen, discuss what lessons the Nordic countries can draw from this.

The discussion will be followed by an audience Q&A and the event will be moderated by Dr. Niklas Swanström, ISDP’s Executive Director.