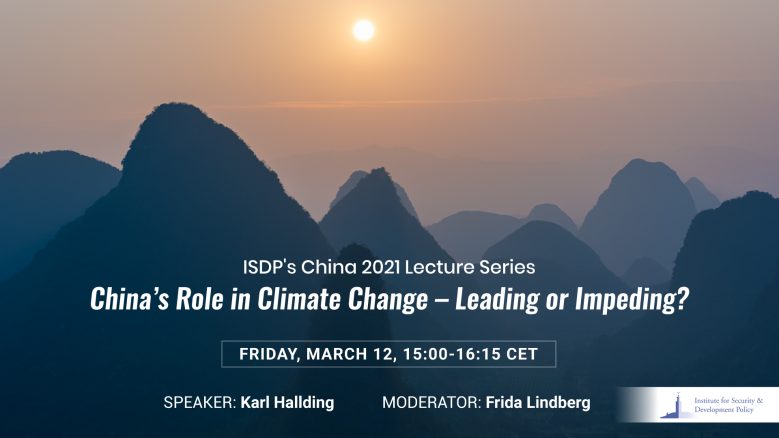 Climate change mitigation is at the top of many countries’ political agendas. China accounts for nearly 30 percent of global emissions and has pledged to peak its emissions before 2030, which puts the country at the center of climate change discussions.

In an address to the UN General Assembly in September 2020, President Xi Jinping surprisingly announced that China would be climate neutral by 2060. Many applauded the country’s new leading role within climate change mitigation, but some question the country’s dedication to the cause. This event aims to answer the question: how can the rest of the world relate to commitments from a country that sets itself a green precedent while at the same time being the largest single financier of new fossil-based infrastructure?

ISDP is honored to welcome Karl Hallding, Senior Research Fellow at the Stockholm Environment Institute and Mistra Geopolitics, as the speaker for this webinar. He has extensive experience from international co-operation on environmental issues, with a focus on the growing global importance of China and other emerging economies. Mr. Hallding’s current work within the Mistra Geopolitics Programme involves analyzing the changing dynamics of geopolitics and sustainable development and conducting scenario analyses of environmentally related opportunities and threats on a global scale.