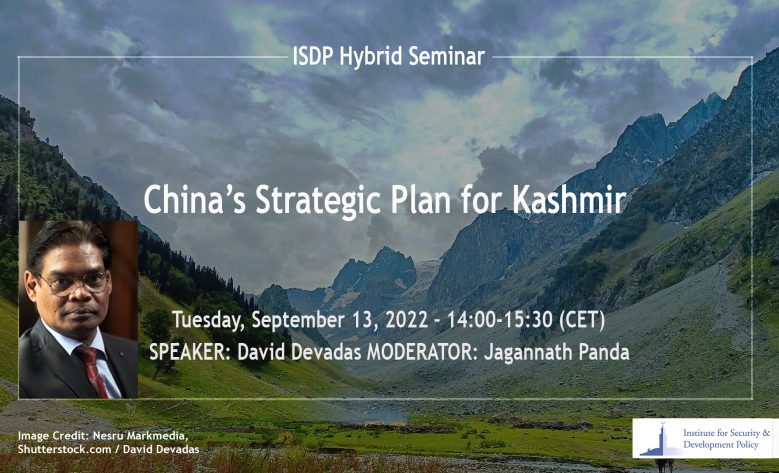 China’s role and stance on Kashmir has been a matter of serious academic and scholarly debate for few decades. China under Xi Jinping’s leadership is continuously influencing the politics surrounding the Kashmir region. In fact, Beijing’s recent aggressive stance on the Western sector (Ladakh region) of the China-India boundary has significant implications for Kashmir. Not only is the Chinese aggression changing the geo-strategic matrix among China-India-Pakistan on ground, but also Beijing’s special relationship with Pakistan through the China-Pakistan Economic Corridor (CPEC) is influencing the character in the Himalayan region. What is China’s current and future objective in Kashmir? How is Beijing’s changing the status-quo in the region? What implications will China have for the future of Kashmir, and also for India? David Devadas, a Distinguished Fellow at the Institute of Social Science in New Delhi, will delve on some of these questions.

David Devadas has written three books on Kashmir and has been described by Oxford University Press as an authority on the subject. Living with families in rural, urban, and suburban Kashmir for long periods over the past quarter-century, Devadas has objectively revealed new facts about the region, and his predictions have proved consistently accurate.

Devadas has presented critically acclaimed papers at international conferences at the University of Heidelberg, Zurich University, and Jawaharlal Nehru University, and has been published in a peer-reviewed journal of Humboldt University in Berlin. He wrote a fortnightly column on Security Matters for Newslaundry in 2020, and has been published in India Today, Indian Express, Business Standard, The Tribune, Gulf News, Firstpost, The Wire, Quint, Rediff.com, The New Indian, Scroll, The Hindustan Times, and The Economic Times. He is a Distinguished Fellow of the Institute for Social Sciences, he has been a Senior Fellow at the Nehru Memorial Museum and Library, a Visiting Professor at Jamia Millia Islamia, and Writer in Residence at St Stephen’s College and the Sanskriti Foundation.

This event will be moderated by Dr. Jagannath Panda, Head of the Stockholm Center for South Asia and Indo-Pacific Affairs (SCSA-IPA) at the ISDP.

David Devadas will visit ISDP in Stockholm, here you register for digital participation.