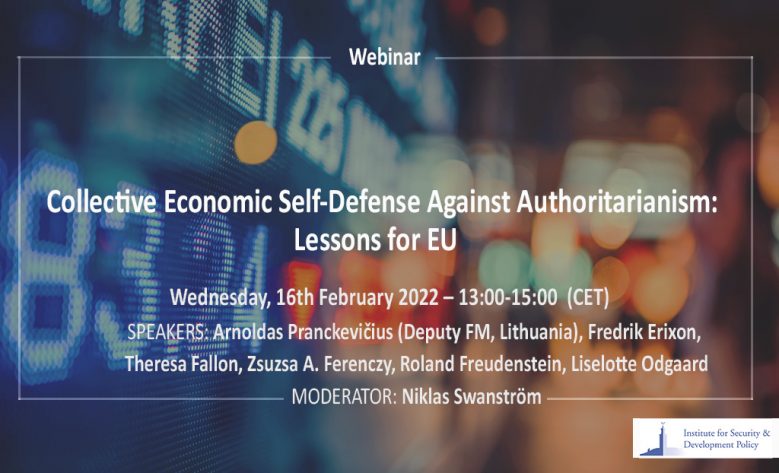 Did you miss this webinar? A recording is available on ISDP’s YouTube channel.

Here you can find the accompanying publication.

There is a growing threat from non-democracies – the use of the economy as coercion. This has been especially apparent for Europe in its relations with China and Russia. Norway and Sweden, among several states, were put in the freezer and most recently Lithuania has been exposed to Chinese anger for asserting their sovereign right to take independent decisions on diplomatic matters.

ISDP arranges a webinar about the feasibility and importance of developing a mechanism for the EU to handle economic coercion by authoritarian states with an accompanying publication from some leading voices on the topic.

It is beyond doubt that China’s coercive economic measures directed towards Europe, the United States and Asia have escalated. Such measures could be described as “wolf warrior trade” and have included, for example, sudden tariff hikes, restrictions in agricultural imports, refusal of export or import, and sanctions against individual countries – and Russia is not far from following suit with the recent blackmails over Nord Stream 2. Neither Beijing’s nor Moscow’s objectives tend to be economical; instead, they seek to influence the policies of other states by instrumentalizing economic relations. As a result, China’s and Russia’s coercive economic actions pose a threat to all elements of society. With this in mind, Democratic allies should be able to reply with collective defense.

The EU needs a way of dealing with authoritarian states from a position of strength, and Europe’s strength lies in its economy. We want to explore what the European Union can do to counter this trend of economic coercion, alone or in cooperation with other democracies. Questions that will arise are if there is enough cohesion among the EU members, are states willing to take the economic costs and are the EU willing to risk the very democratic fabric for short-term economic profit and does Europe has the financial independence to stand up to China and Russia? Moreover, we are interested in the international experiences and how an extended collective economic self-defense could be designed.

Zsuzsa A. Ferenczy, postdoctoral Research Fellow hosted by the Ministry of Science and Technology of Taiwan and Assistant Professor at the National Dong Hwa University in Hualien

Liselotte Odgaard, professor at the Norwegian Institute for Defense Studies in Oslo and a non-resident senior fellow at Hudson Institute

Niklas Swanström, Executive Director at ISDP, will moderate the webinar.