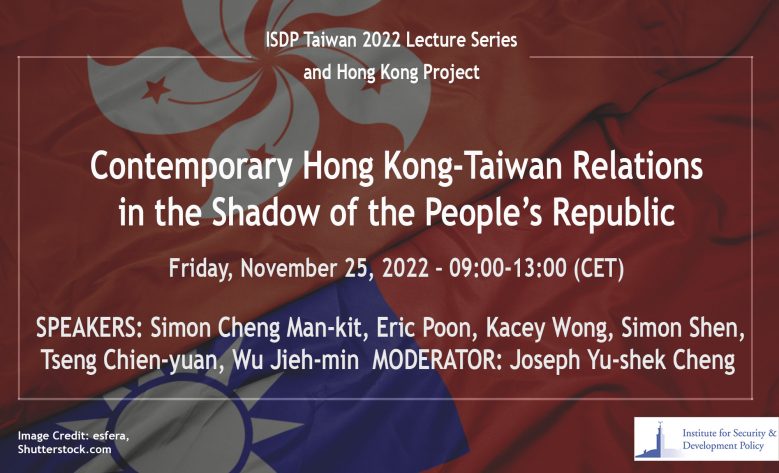 Since the mid-2010s, mutual support between the democracy movements in Taiwan and Hong Kong has been considerably strengthened. Both communities feel the pressures from Beijing and its tendency to dictate policies without consideration for the local public opinions. Lobbying efforts on the part of Taiwan and Hong Kong in the international community tend to be mutually reinforcing too.

When Hong Kong people launched a new wave of emigration at the end of the last decade, Taiwan was a preferred destination because of its socioeconomic environment and existing policy. However, the actual tightening of the relevant processes has given rise to some resentment among Hong Kong residents in Taiwan, while the Taiwan authorities naturally have their security concerns. Simon Cheng is a British pro-democracy activist, human rights advocate, and exile from Hong Kong. He studied political science at National Taiwan University and the London School of Economics and worked in trade and investment at the British Consulate General in Hong Kong. Due to his pro-democracy stance, he was detained by the Chinese authorities, hunted by the security police, and stigmatized by the state media. He is the founder and chairperson of Hongkongers in Britain, a non-profit expatriate organization. He will talk about the “Hong Kong pro-democracy movement, what next and will it change the political climate?” Dr. Tseng Chien-yuan obtained a PhD in Law from the Graduate Institute of National Development at National Taiwan University. He is currently Adjunct Associate Professor at the Department of Hakka Language and Social Sciences at National Quemoy University. He is also Chairman of the Board of Directors of the New School for Democracy and CEO of Scoop Taiwan Media Network Think Tank. Dr. Wu Jieh-min is a research fellow at the Institute of Sociology, Academia Sinica, Taiwan. He co-founded the Center for Contemporary China, National Tsing Hua University, and has published widely on China’s development, social movements, Hong Kong, and Taiwan-China relations. His most recent books include Rival Partners: How Taiwanese Entrepreneurs and Guangdong Officials Forged the China Development Model (Harvard University Asia Center, 2022), China’s Influence and the Center-periphery Tug of War in Hong Kong, Taiwan and Indo-Pacific (with Brian Fong and Andrew Nathan, Routledge, 2021), and The Political Sociology of the “China Factor”: The Penetration of Chinese Influence in Taiwan Society (「中国ファクター」の政治社会学——台湾社会における中国の影響力の浸透, with Momoko Kawakami. Tokyo: Hakusuisha, 2021). Eric Poon is a lawyer qualified to practise in Taiwan and New York State, and is also a solicitor qualified to practise in Hong Kong. He has devoted himself to a wide range of public pro bono matters and serves as an active commentator on China and international legal, political, social and economic affairs in various Taiwan TV shows and social media. His major area of interest and research is the recent legal and geopolitical trends in Taiwan, Hong Kong and China. He has hosted and also participated in various seminars on relevant topics. His academic article, “Hong Kong Anti-Extradition Movement: Reflections and Strategies”, was published in Taiwan Democracy Quarterly Vol. 17, No. 4 December 2020. He has also written a number of articles in various newspapers and social media in recent years. Dr. Simon Shen is currently an Associate Professor of the College of Social Sciences and Vice-Director of the Center for Taiwan & Hong Kong at National Sun Yat-sen University in Taiwan (R.O.C.). Graduated from University of Oxford (DPhil) and Yale University (MA/BA), Dr. Shen is an international relations scholar who has published more than 70 academic articles including in leading SSCI journals such as China Quarterly, China Review, Journal of Contemporary China, Pacific Affairs, Pacific Review, Asian Survey, among others. Prior to moving to Taiwan, he was an Associate Professor at the Chinese University of Hong Kong, where he also served as Director of the Global Studies Programme, Director of Master of Global Political Economy Programme and Director of International Affairs Research Center of Hong Kong Institute of Asia-Pacific Studies. He has served as a Visiting Fellow of Brookings Institution, East-West Center, University of Warwick, National University of Singapore, Rikkyo University, Academic Sinica, among others. Dr. Shen is also active in media and is running a social media channel with hundreds of thousands of followers. Dr. Kacey Wong was born in 1970 in Hong Kong. He studied architecture in Cornell University and received his Master of Fine Arts degree from Chelsea School of Art and Design and Doctor of Fine Arts Degree from Royal Melbourne Institute of Technology. He is the founding member of Art Citizens, Street Design Union, Umbrella Movement Art Preservation, and former curator & member of Para/Site Art Space. He is also a former Assistant Professor at The Hong Kong Polytechnic University, School of Design’s Environment and Interior Design Discipline. Currently he is an Examiner of the Hong Kong Arts Development Council. Kacey participated in many large scales protest using props and cosplay, when the Chinese Communist Party clamped down on Hong Kong’s pro-democracy movement. In pursuit for 100% freedom of artistic expression, Kacey bid farewell to Hong Kong in 2021 and ventured in self-exile to Taiwan, his art studio is now established in Taichung. Kacey will share his personal experience as an artist in exile, talk about protest activist art from 2014 Umbrella Movement to 2019 Anti- Extradition Law Movement in Hong Kong with a focus on changing artistic strategies from civil obedience to uncivil disobedience, and his recent protest art activities in Taiwan. Dr. Joseph Yu-shek CHENG is a retired Professor of Political Science and the Coordinator of the Contemporary China Research Project, City University of Hong Kong. He is the founding editor of the Hong Kong Journal of Social Sciences and the Journal of Comparative Asian Development. As an independent researcher and writer since 2015, he publishes widely on the political developments in China and Hong Kong, Chinese foreign policy and development in southern China. His recent books include, inter alia, China’s Foreign Policy (2016), Multilateral Approach in China’s Foreign Policy (2018), Political Development in Hong Kong (2020), and Evaluation of the C.Y. Leung Administration (2020). He served as the Convener of the Alliance for True Democracy in Hong Kong, the Rector of the New School for Democracy, and a trustee of the Justice Defence Fund in Hong Kong. Dr. Cheng will be speaking about “Taiwan’s Support for the Hong Kong Pro-Democracy Cause”. He is also the moderator of the event.

The hosts Dr. Joseph Yu-shek Cheng and Dr. Torbjörn Lodén present the seminar and the panelists

“Hong Kong pro-democracy movement, what next and will it change the political climate?”

“Taiwan’s Support for the Hong Kong Pro-Democracy Cause”

“On My Personal Experience as an Artist in Exile”

“Hong Kong-Taiwan Nexus in the Shadow of China”