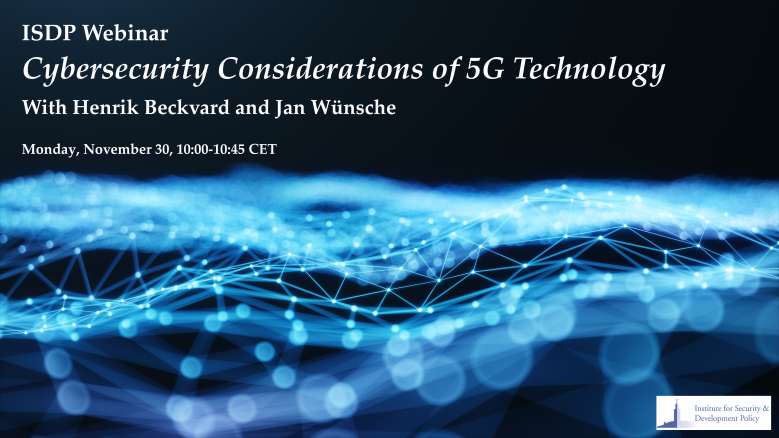 The rollout of 5G offers many benefits, but with our growing reliance on the 5G technology, there is a need to recognize the choice of supplier as a strategic rather than merely a technological question. In this context, it is important to understand the Chinese national policy of technological superiority, the track record of cyber activity, and the political environment and legal landscape in which Chinese companies operate. The decisions we make today will have an impact on our tomorrow.

Based on the paper, Huawei, 5G, and China as a Security Threat, researchers Henrik Beckvard and Jan Wünsche from the Cooperative Cyber Defence Centre of Excellence (NATO CCDCOE) are joining this ISDP webinar to discuss cybersecurity considerations related to 5G. The event will be moderated by ISDP’s Executive Director, Niklas Swanström.

Jan Wünsche joined the NATO Cooperative Cyber Defence Centre of Excellence in February 2020 as a researcher in the Strategy branch. Jan’s professional experience has mainly been in the fields of software development and cybersecurity. He has worked as a consultant and has held cybersecurity positions at the Swedish Parliament and the Swedish Armed Forces. Prior to joining the CCDCOE, he was a Cyber Security Strategist at the Swedish Military Intelligence and Security Service. Jan earned a Master of Science degree in Computer Science from Uppsala University and has also taken courses at the University of Michigan, the Geneva Institute for Security Policy, and the Swedish Defence University.

The CCDCOE is a cyber defense think tank, training, and exercise facility and is not part of the NATO command structure. As a community of 29 nations, the CCDCOE holds expertise in the areas of technology, strategy, operations, and law and provides a 360-degree look at cyber defense.

The mission of the NATO CCDCOE is to support NATO and the Centre’s member nations in the fields of cyber defense research, training, and exercises by providing cyber defense expertise within the focus areas of technology, strategy, operations, and law.

This presentation is a product of the CCDCOE but does not reflect the policy or the opinion of NATO or any of the CCDCOE Member Nations.