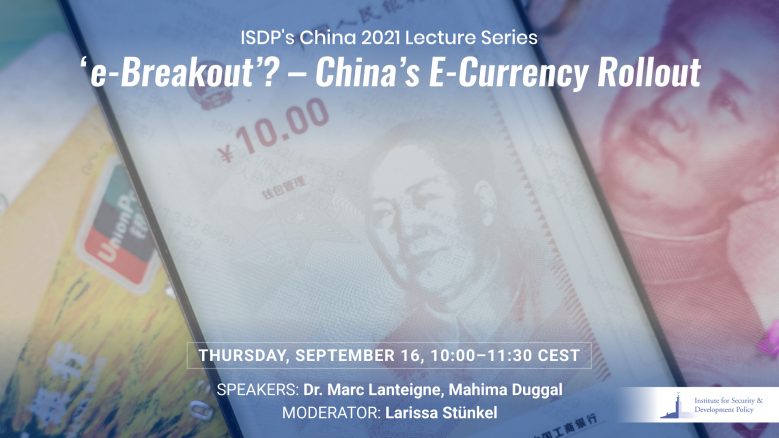 The government of China has touted the development of a digital version of its currency as a watershed moment in its ongoing financial modernization processes. The experimental ‘digital renminbi’, or eCNY, is expected to be fully implemented in the next few years. Thus far, its initial benefits have been seen primarily on the domestic level. However, Beijing has also hinted at the possibility of the eCNY being used for international transactions including via the Belt and Road Initiative, leading to questions as to whether this e-currency could develop into a global standard as many governments seek to develop their own central bank digital currencies. The concept of ‘weaponized interdependence’ – meaning the ability of states to gain advantages from global networks via the collection of data, and the ability to deny others access and benefits – is an ideal method of measuring the potential for the digital renminbi to act as another front as Sino-American economic competition intensifies.

We are honored to welcome Dr. Marc Lanteigne and Mahima Duggal for a discussion on the wider implications of China’s e-currency rollout. Dr. Marc Lanteigne is an Associate Professor of Political Science at UiT – The Arctic University of Norway, Tromsø, specializing in Chinese and comparative East Asia political and international affairs. He is the author of China and International Institutions: Alternate Paths to Global Power, and Chinese Foreign Policy: An Introduction, as well as numerous articles and chapters on these subjects. Mahima Duggal is an Associate Research Fellow at ISDP. She is an Editorial Assistant to the Series Editor at Routledge Studies on Think Asia and has worked for several non-governmental organizations in both India and Singapore.