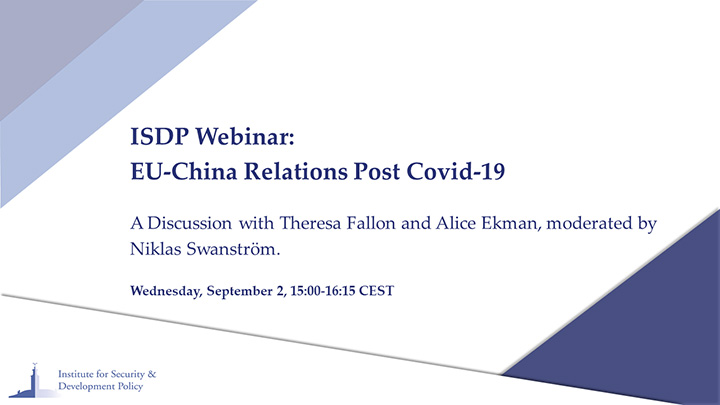 The Covid-19 pandemic has further strained the already tense relations between China and the European Union, fueled by criticism over the recently implemented Hong Kong national security law and concern over the deployment of telecom giant Huawei’s 5G technology in Europe.

At the end of August, Chinese Foreign Minister, Wang Yi, embarked on a tour to visit five European countries; Italy, the Netherlands, France, Norway, and Germany. Set against severely worsened U.S.-China relations, China is seemingly making Europe a priority on its diplomatic agenda, positioning itself as an advocate for multilateralism and promoting Sino-European collaboration on the handling of the Covid-19 pandemic as well as the revitalization of the global economy. However, the one-week tour follows months of China’s controversial “mask diplomacy” efforts and targeted disinformation campaigns. Is the tour an attempt at “damage control” by China? And what challenges lie ahead for EU-China relations?

ISDP is honored to have two experts on the topic of EU-China relations join us for a virtual discussion. Alice Ekman is a Senior Analyst in charge of Asia at the European Union Institute for Security Studies (EUISS) and CSCAP-EU Coordinator. Theresa Fallon is the founder and director of the Centre for Russia Europe Asia Studies (CREAS) in Brussels. The event will be moderated by Niklas Swanström, Executive Director of ISDP.