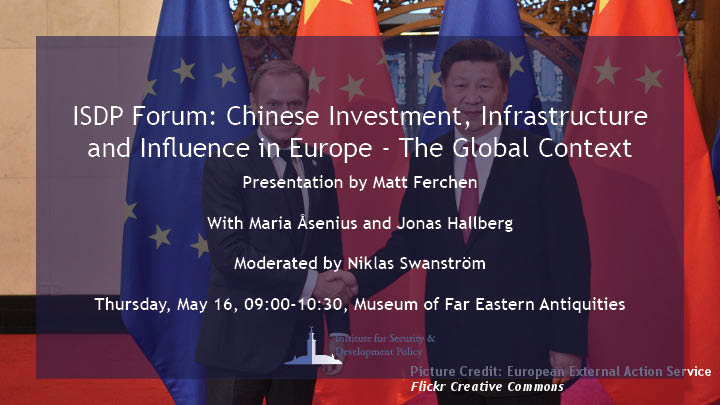 Since 2008, Chinese foreign direct investments (FDI) in the EU has increased almost 50 times, with 2018 seeing a drop in line with the global trend in Chinese FDI. Last year, Sweden rose to became the second most favored destination in the Union as Chinese investors poured 3.4 billion euros into the country. The rapid rise of Chinese outbound investment in the past decade has triggered an overhaul of investment screening regimes in many European advanced economies, with the EU as a whole introducing a screening mechanism in April 2019. These developments are part of increasing apprehension among some European countries regarding the aims and goals of China’s Belt and Road Initiative (BRI).

In this ISDP Forum, Dr. Matt Ferchen, non-resident scholar at the Carnegie-Tsinghua Center for Global Policy, will give a presentation on Chinese investments and infrastructure financing within the framework of the BRI and the 17+1 grouping of 17 Central and Eastern European States and China.

After the presentation, Dr. Ferchen will be joined in a panel discussion by Ms. Maria Åsenius, Head of Cabinet for the EU Commissioner for Trade, Cecilia Malmström and Mr. Jonas Hallberg, Trade Policy Adviser and Legal Adviser at the National Board of Trade of Sweden.

The forum will be moderated by Dr. Niklas Swanström, Executive Director of ISDP. The forum is organized in cooperation with the U.S. Embassy in Stockholm.

Matt Ferchen is a nonresident scholar at the Carnegie–Tsinghua Center for Global Policy, where he runs the China and the Developing World Program. His research and writing focuses on the political economy of the “China model” of development, as well as on the nexus of development and security in China’s foreign policy.

Mr. Ferchen is part of the Public Intellectual Program sponsored by the National Committee on United States-China Relations. His work has appeared in numerous media publications such as Foreign Affairs, Caijing, the Diplomat, EL PAÍS, and Phoenix Weekly, as well as in academic publications such as the Review of International Political Economy and the Chinese Journal of International Politics.