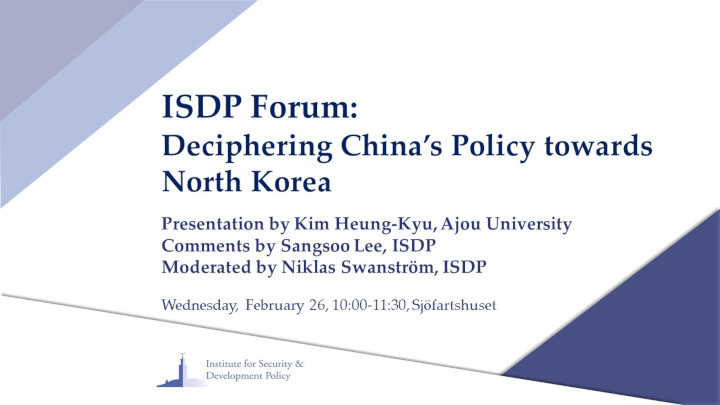 A common perception is that North Korea is China’s strategic asset and natural ally due to ideology, geographical proximity, great power competition, and the fact that they fought on the same side in the Korean War. A more careful look at China’s policies on North Korea reveal, however, evolutions in approach. In particular, deciphering China’s North Korea policies under Xi Jinping has recently been a subject of intense debate. From a chilly start, relations between the two states appear to have thawed considerably in the past two years. How then should we understand changes in China’s policy? How does North Korea view China? And what are the implications for resolving the nuclear issue?

Dr. Kim Heung-Kyu is founder and director of the China Policy Institute at Ajou University in South Korea. He has authored more than 300 articles, books, and policy papers regarding Chinese politics and foreign policy, as well as security issues in Northeast Asia. He currently also serves as a foreign policy advisor on several committees to the South Korean president and government. He obtained his PhD in political science from the University of Michigan.

Dr. Kim’s presentation will be followed by remarks from Dr. Sangsoo Lee, Head of the ISDP Korea Center, and an open Q&A moderated by Dr. Niklas Swanström, Executive Director of ISDP.