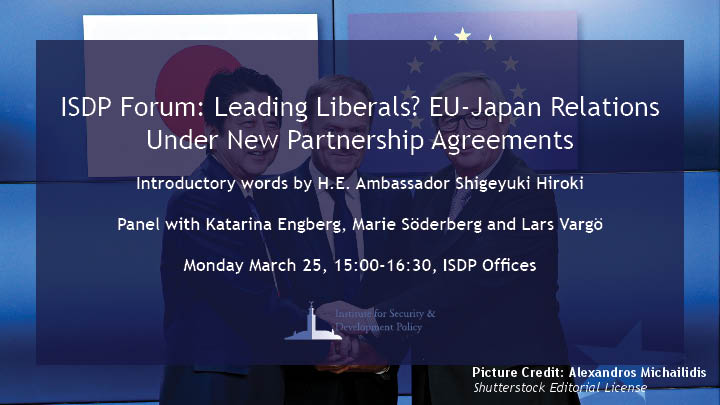 On February 1, the Economic Partnership Agreement (EPA) signed between the European Union (EU) and Japan formally entered into force. Pending ratification by EU Member States is also the EU-Japan Strategic Partnership Agreement (SPA), a document outlining areas of cooperation in the political sphere. On paper, these agreements allow two parties who have found common ground on values like democracy, a market-based economy and human rights to cooperate on safeguarding the liberal world order. Actions, however, speak louder than words and now is the time to get more concrete. What opportunities do these agreements hold for the EU and Japan? What limitations are there? And how are EU-Japan relations likely to develop going forward?

Focusing particuarly on the EU-Japan SPA, in this ISDP Forum we will explore the above questions with H.E. Mr. Shigeyuki Hiroki, Ambassador of Japan to Sweden, Dr. Katarina Engberg, Senior Advisor at the Swedish Institute for European Policy Studies, Dr. Marie Söderberg, Director of the European Institute of Japanese Studies at the Stockholm School of Economics, and Dr. Lars Vargö, Head of the Stockholm Japan Center at ISDP. The forum will be moderated by Dr. Niklas Swanström, Executive Director of ISDP.