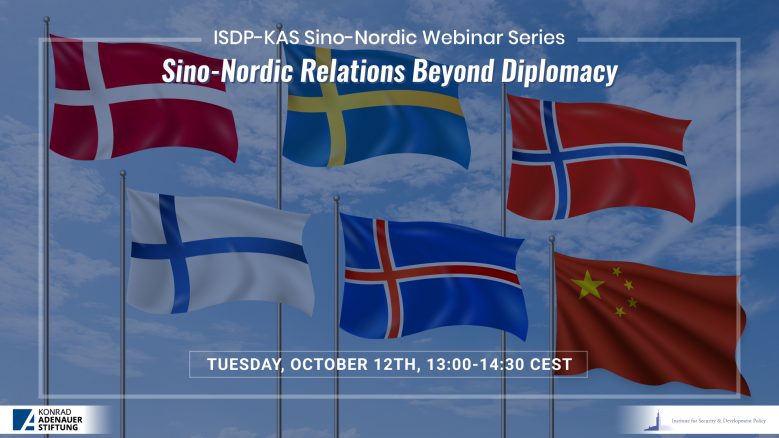 In this second joint ISDP-Konrad Adenauer Stiftung (KAS) webinar, invited discussants will touch upon some of the non-state aspects of the relationship between China and the Nordic states. This includes trade and business, which forms a cornerstone of exchanges between Northern Europe and East Asia. It further delves into education and culture as well as shared ideology, which helps to frame how social and economic phenomena impact individuals’ daily lives. This discussion is a follow-up to our event from September 28th which explored the diplomatic history and state-to-state relations between China and the Nordic states.

Did you miss the webinar? Watch the online recording here.

Ms. Kristina Sandklef is an independent China analyst running her own consultancy company, Sandklef Asia Insights, She has a BA in Chinese studies from Lund University as well as a minor in development studies in political science and economics. She worked as a consumer research analyst and advisor at Ericsson for nine years and has worked as a China analyst for the Swedish Armed Forces as well as a China macroeconomist at the asset fund manager East Capital.

Dr. Torbjörn Lodén is the Head of the Stockholm China center at the ISDP. He previously served as a Professor of Chinese at Stockholm University. From 1973 to 1976 he was the Cultural Attaché at the Swedish Embassy in Beijing and was a research fellow at City University in Hong Kong from 2003 to 2004. He is a member of the Royal Swedish Academy of Letters, History, and Antiquities.

Mr. David Merkle is a Desk Officer China at Konrad Adenauer Foundation(KAS). He studied East Asian Studies at the University of Bochum (B.A.) and the University of Tübingen (M.A.) with a focus on China and Taiwan. He spent two years in Taiwan, among others as an exchange student at National Chung Hsing University in Taichung. Prior to his current position, he was a project assistant at the Shanghai office of KAS and has worked for the Bank of China Ltd. in Frankfurt am Main.