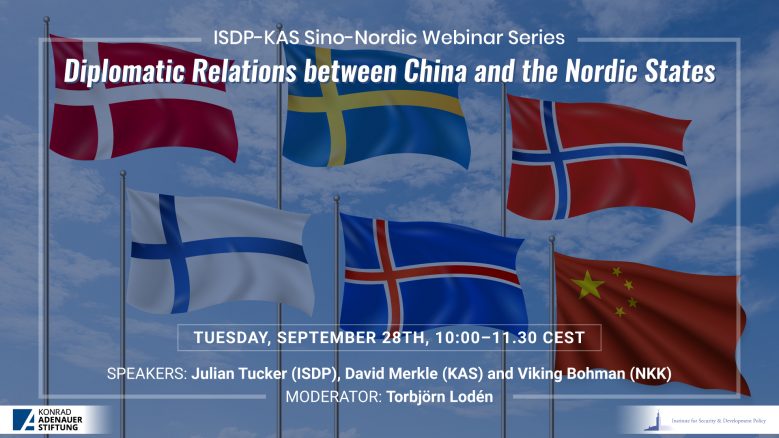 This webinar introduced the Institute of Security and Development Policy (ISDP) and Konrad Adenauer Stiftung (KAS) report on Sino-Nordic relations by focusing on the diplomatic and political dynamics of relations between China and the Nordic States.

Our speakers will lift major political issues between the governance system of the People’s Republic of China and the Nordic countries. Discuss multiple issues, such as the history of (modern) diplomatic exchanges between China and the Nordic countries, similarities and differences in governance models, instances of cooperation and confrontation in global governance issues, the development of public opinion, United Front work, sanctions, and diplomatic disputes, security policy with regards to infrastructure, etc.

Attending speakers
Mr. Julian Tucker is a Research Fellow and Research Coordinator at the Stockholm China Center of ISDP. He holds a Master of Arts in Central Asian Studies at the Humboldt University in Berlin, Germany. Additionally,  has he pursued Uzbek language and history courses at the Samarkand State Institute of Foreign Languages in Uzbekistan. He holds a BA in Anthropology and Middle Eastern Languages from McGill University in Montreal, Canada.

Mr. David Merkle is a Desk Officer China at Konrad Adenauer Foundation(KAS). He studied East Asian Studies at the University of Bochum (B.A.) and the University of Tübingen (M.A.) with a focus on China and Taiwan. He spent two years in Taiwan, among others as an exchange student at National Chung Hsing University in Taichung. Prior to his current position, he was a project assistant at the Shanghai office of KAS and has worked for the Bank of China Ltd. in Frankfurt am Main.

Mr. Viking Bohman is an analyst at the Swedish National China Centre. He comes from a background at the Ministry for Foreign Affairs in Stockholm and the Embassy of Sweden in Beijing. He holds a double MSc degree in International Affairs from the London School of Economics and Political Science (LSE) and Peking University.
Recording of the event can be found here