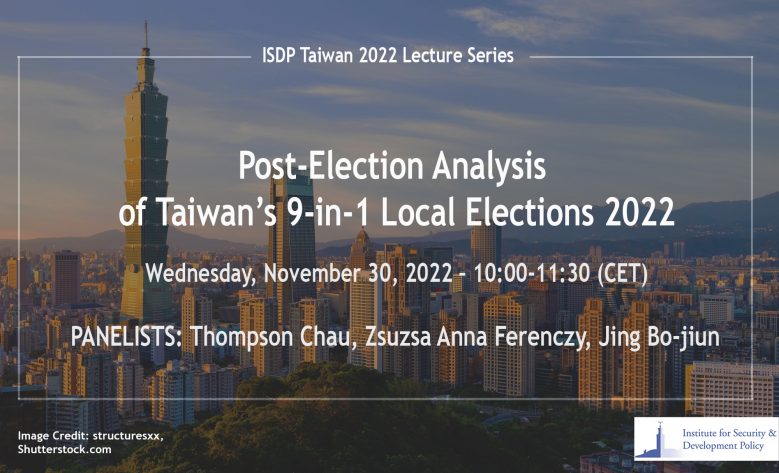 On Saturday, November 26, Taiwan will hold its quadrennial “9-in-1” local elections, during which Taiwanese voters will head to the polls to elect 11,023 public officials in nine different categories of posts – including mayors of the six special municipalities (Taipei, New Taipei, Taoyuan, Taichung, Tainan, and Kaohsiung) and magistrates or mayors of 16 counties and cities. In the polling stations, voters will also decide in a referendum whether to approve of a constitutional amendment to lower both the voting age and the minimum age of candidacy to 18.

On November 30, the Taiwan Studies Series Project at ISDP will host an expert panel under its Taiwan Lecture Series to discuss various aspects of Taiwan’s local elections. The panelists will analyze the outcome of the elections, unpack the important issues during the campaigns, and assess the implications for Taiwan’s presidential elections in 2024 and U.S.-China-Taiwan relations. Thompson Chau is a journalist covering news in Taiwan and Myanmar primarily for Nikkei Asia and the Economist respectively, and concurrently a media executive at awarding-winning Burmese news outlet Frontier Myanmar. He was co-recipient of the 2021 Vivian Wu Journalism Award, and has written for the Financial Times, Foreign Policy, the Guardian, the Telegraph and other publications. Outside journalism, Thompson served as a director of the Myanmar-Hong Kong Chamber of Commerce and Industry until recently. He has a Master of Arts from Scotland’s University of St Andrews. Dr. Zsuzsa Anna Ferenczy is an Affiliated Scholar at the Department of Political Science of the Vrije Universiteit Brussel (Free University of Brussels), Associated Research Fellow at ISDP, and Head of the Associate Network at 9DASHLINE – a fast-growing platform dedicated to offering original comment and analysis on issues affecting the Indo-Pacific. She is also a Research Fellow at Taiwan Next Gen Foundation, Expert Consultant on China, Taiwan and the Korean Peninsula of Human Rights Without Frontiers. Currently Zsuzsa conducts research as a Taiwan Fellow hosted by the Ministry of Science and Technology of Taiwan, and is an Assistant Professor at the National Dong Hwa University in Hualien. Zsuzsa’s fields of expertise are EU foreign and security policy, European normative power and human rights, EU relations with China and Taiwan in the Indo-Pacific.

Jing Bo-jiun is a Research Fellow at ISDP’s Asia Program and Stockholm China Center. He is also a member of the Chatham House-Korea Foundation Next Generation Policy Expert Network 2022 and a founder of the ASEAN Plus Journal in Taiwan. His research focuses on Taiwan’s foreign policy towards Southeast Asia, the EU’s Indo-Pacific strategy towards ASEAN, Taiwan’s domestic politics and cybersecurity policy, and U.S.-China-Taiwan relations. Bo-jiun recently passed his Ph.D. viva (defense) in International Political Economy at King’s College London. He previously worked as a Research Associate at the Lee Kuan Yew School of Public Policy in Singapore and as an Associate Researcher at the Mainland Affairs Council in Taiwan.