Resumption of Dialogue on the Korean Peninsula: Five Perspectives 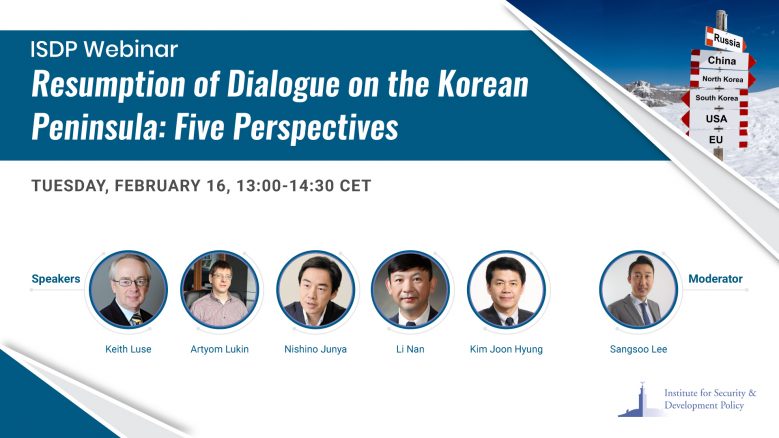 The momentum created by the incipient framework for building peaceful relations between the U.S., the Republic of Korea (ROK), and the Democratic People’s Republic of Korea (DPRK) culminated at the Singapore Summit in June 2018 and was further buttressed by the inter-Korean Panmunjom and Pyongyang declarations. Unfortunately, such hopes for a sustainable diplomatic breakthrough did not last for long. North Korea’s unwillingness to denuclearize all at once and to offer more than the Yongbyon nuclear facility, coupled with the U.S.’ rejection of reciprocating with corresponding measures, namely lifting sanctions, brought the Hanoi Summit to an end without a deal in 2019.

Furthermore, even the October 2019 working-level talks in Stockholm, which marked the last effort to reach a breakthrough, ended uneventfully, while inter-Korean relations also stalemated. It is essential to restart talks for peace and denuclearization on the Korean Peninsula, and to encourage commitment to the framework of peaceful resolution of disputes through diplomacy. This is why ISDP has long sought to provide an equal platform for debate for all relevant parties and positions. ISDP’s Korea Center, believing in the importance and the added value that multiple perspectives bring to peace processes has invited five experts from five different countries – China, South Korea, Russia, Japan,  and the United States – to each share their perspectives on the considerable challenges but also opportunities ahead in breaking the current stalemate on the Korean Peninsula.

This panel discussion will focus on the steps toward resuming a peace and denuclearization process on the Korean Peninsula amidst the current impasse and ongoing pandemic. The speakers will discuss and respond to the following questions: Why has there been a general inability to secure a deal with the DPRK? And how should one evaluate the challenges and opportunities for policymakers on the road ahead?

ISDP is honored to welcome five distinguished speakers to present their perspectives on the “Resumption of Dialogue on the Korean Peninsula”; Kim Joon-hyung, Professor of International Relations at Handong Global University and the Chancellor of Korea National Diplomatic Academy of Ministry of Foreign Affairs, Nishino Junya, Professor at the Department of Political Science at Keio University and Director of the Keio Center for Contemporary Korean Studies, Li Nan, Senior Fellow at the Pangoal Institution and Associate Research Fellow at the Chinese Academy of Social Sciences in China, Keith Luse, the Executive Director of the National Committee on North Korea, and Lukin Artyom, Associate Professor at the School of Regional and International Studies, Far Eastern Federal University.

The Head of ISDP’s Korea Center, Sangsoo Lee, will moderate this event.