Shifting Geopolitics in the Pacific Islands 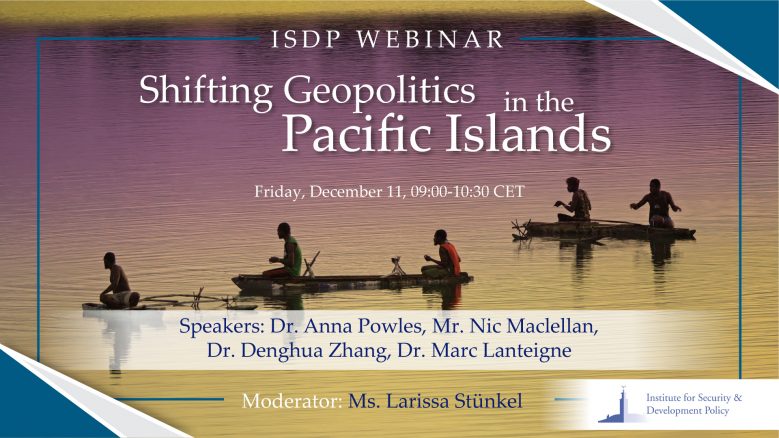 The Pacific Islands have become an international symbol for the devastating impact that climate change has on our lives. However, in recent years they have also been at the center of intensifying competition for influence as foreign powers either have, or are beginning to, recalibrate their foreign policies. Ranging from China’s ambitious Belt and Road Initiative to supposedly counter-policies – most notably Australia’s “Pacific Step Up” and New Zealand’s “Pacific Reset” – the race to challenge the region’s security set-up might have only just begun.

This webinar will shed light on the role foreign powers play in a region that has re-appeared on the geopolitical radar. Starting out by asking how foreign influence looks like on the ground more generally, it will then move on tracing China’s Pacific diplomacy as well as zoom in on the impact of the China-Taiwan tug of war.

We are honored to have four distinguished experts join us for a discussion on the topic “Shifting Geopolitics in the Pacific Islands”:

Dr. Anna Powles is a Senior Lecturer in Security Studies at Massey University, New Zealand. Her work focuses on the regional security order of the Pacific Islands region.

Dr. Denghua Zhang is a Research Fellow at the College of Asia & the Pacific at the Australian National University, Australia. Formerly a Chinese diplomat, his current research looks at Chinese foreign policy, foreign aid, and China-Pacific relations.

Mr. Nic Maclellan is a journalist and researcher based in the Pacific Islands. He is a correspondent for Islands Business (Fiji) and has written for Pacnews, Inside Story, and other regional media outlets. He has published widely on France’s foreign policy in the Pacific, being the co-author of “La France dans le Pacifique – de Bogainville à Moruroa” (Éditions la Découverte, Paris). His latest book “Grappling with the Bomb” (ANU Press, Canberra) was shortlisted for the EPAA Scholarly Book of the Year in 2019.

Dr. Marc Lanteigne is an Associate Professor of Political Science at the Arctic University of Norway, Norway. His research focuses on Chinese and comparative East Asian foreign policy, including Taiwan-China relations in the Pacific Islands.

The panel discussion will be followed by an audience Q&A and the event will be moderated by Ms. Larissa Stünkel, Junior Research Fellow at ISDP’s Stockholm China Center.