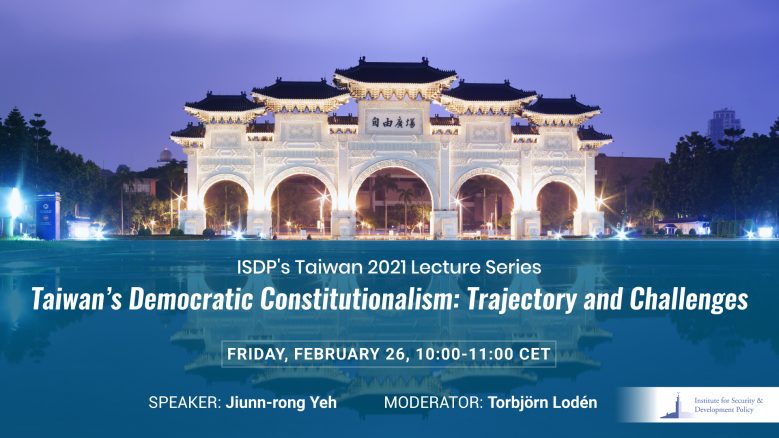 Taiwan has been making steady strides to consolidate its democracy, in addition to its miraculous economic growth in the 1970s and 1980s. The island’s democratic miracle brought about a silent transition from a notoriously authoritarian regime to a full democracy in Asia. Intertwined with that miracle is the constitutional one, in which political reform was undertaken in a constitutional manner and through constitutional means. Indeed, Taiwan’s transition to democracy was made possible by incremental constitutional revisions, courts responsive to changing dynamics, and a civil society engaged in the project of constitutional transformation. These changes ushered in an unprecedented development of a democratic constitutionalism with strong civic features.

In this lecture, Professor Jiunn-rong Yeh seeks to explain the drivers and context of these constitutional transformations. Democratization, indigenization, and globalization all drove the transformation of an externally imposed constitution into an internally embraced and vibrant constitutional democracy. The changes include institutional shifts from a cabinet system to a semi-presidential one; from three parliaments to one; from manipulated central-local relations to a functional federalism; from a Constitutional Court that merely rubber-stamped to one that is responsive and supports social and political dialogues. Moreover, Professor Yeh will shed light on recent advancements, including free speech and same-sex marriage, and how these reflect a burgeoning rights-based civil society discourse.

Professor Jiunn-rong Yeh is a Chair Professor at National Taiwan University. He holds a JSD degree from Yale Law School and has researched and taught intensively on the process of constitutional change, globalization and regulatory theories, and environmental sustainability. Professor Yeh previously held several ministerial positions in Taiwan, including the post of Minister of Education and Minister for the Interior. He was a primary drafter of several fundamental legislative bills and was involved heavily in constitutional revisions throughout Taiwan’s democratic transition. Furthermore, he received the Award for Excellence in Research from the National Science Council. His most recent publications include The Constitution of Taiwan: A Contextual Analysis (Hart Publishing, 2016) and Asian Courts in Context (Cambridge University Press, 2015).

The Head of ISDP’s China Center, Dr. Torbjörn Lodén, will moderate the event.