The 2022 Presidential Elections: A glimpse into the Future of South Korea’s Foreign and Security Policies 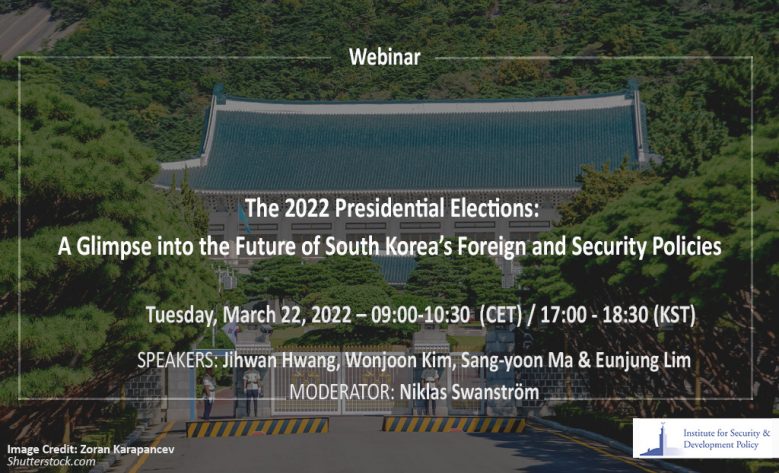 The South Korea presidential elections took place on March 9th, 2022. As Moon Jae-in moves towards the end of his presidency, he leaves a challenging legacy in the foreign policy domain to his successor Yoon Suk-yeol. His promise to achieve permanent peace on the Korean Peninsula has not been fulfilled, instead inter-Korean relations seem to have returned to the 2017 period of extreme chillness. Moon’s successor will either churn to come up with new and “better” concessions to the North to bring it back to the negotiation table or will turn to a deterrence and pressure-focused approach to deal with North Korea’s future threats.

Moon’s successor will also have to navigate the increasingly heated Sino-American confrontation. Acting based on national interest the newly elected President will have to either continue promoting South Korea’s pragmatic relations with the U.S., China, and Japan or strengthen the ROK-U.S. alliance taking a more assertive stance vis-à-vis China. Moon’s most prominent legacy will be the lack of a comprehensive Indo-Pacific strategy. Moon’s successor will be left with the task of establishing an inclusive approach and multipolar vision for the Indo-Pacific region.

Lastly, Moon’s successor will have to grapple with a rapidly changing security environment on the Peninsula and beyond, characterized by an intensifying global competition for technological primacy. The new President-elect will have to devise a new path for South Korea’s security that looks holistically at traditional and non-traditional security threats. The new President will have to, strengthen innovative research capabilities, protect core technologies, and increase the country’s preparedness in the areas of climate and energy security among others.

In light of these considerations and the Presidential elections in South Korea, the ISDP Korea Center will hold a webinar to provide insights into Seoul’s foreign and security policies, focusing mainly on North Korea, the Indo-Pacific amid heightened Sino-American competition and new security threats and technologies.