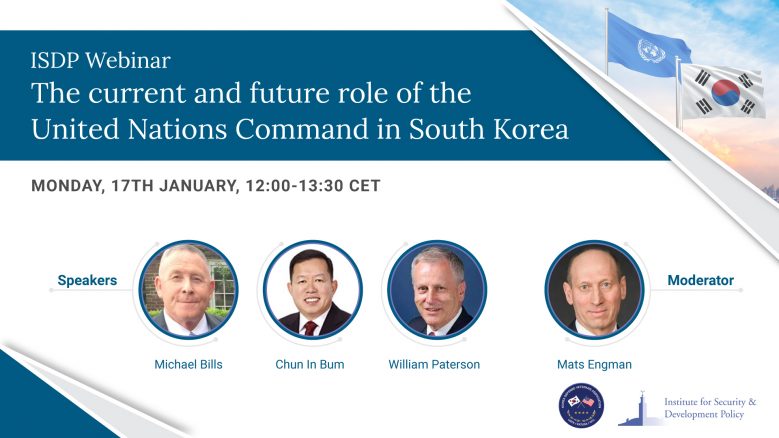 Did you miss this webinar? Here you can find the recording on ISDP’s YouTube channel.

Established in June 1950 the United Nations Command – the unified command for multinational military forces arrayed to aide South Korea during the Korean War – has played a significant role to maintain peace and stability on the Korean Peninsula. When the Korean Armistice Agreement was signed in 1953, the UNC became its official warden, ensuring the maintenance of the Armistice and facilitating inter-Korean diplomacy. Some of the UNC detailed tasks and the operational environment have changed over the years, but the fundamental mission remains.

Furthermore, in the unlikely case of a reprisal of the Korean War, the UNC would, once again, serve as a multinational headquarters to coordinate additional forces deploying to the Korean Peninsula. Seven designated bases located in Japan, are ready to support such deployments, through the UNC rear headquarters. With ongoing discussions on an “End of War” declaration and the transition of wartime operational control to the South Korean government (OPCON) this could affect the discussion around the future role of the UNC.

Recently, the DPRK UN representative called for the termination of the UNC, indicating UNC also plays a role in the diplomatic development on the Peninsula.

So, even today, 68 years later, is UNC still a relevant actor in maintaining peace and stability on the Korean peninsula and supporting inter-Korean dialogue?

To learn more about this and to better understand the complexity and uniqueness of the Armistice Agreement, the role of the UNC and possible consequences of an “End of War” declaration, we are delighted to have three eminent experts joining us.

Lt.Gen. (ret) Michael Bills, Senior Control Trainer for Valiant Integrated Services and former Commanding General of the Eighth Army and Chief of Staff of the ROK-U.S. Combined Forces Command in Korea from 2018 to 2020.

The Webinar will be moderated by Maj Gen (ret) Mats Engman, Distinguished Military Fellow at ISDP.

The Center would like to acknowledge that this event is co-arranged with KDVA and was generously supported by the Korea Foundation.