Transatlantic Perspectives: China’s Sharp Power Activities in Democracies, and How to Respond 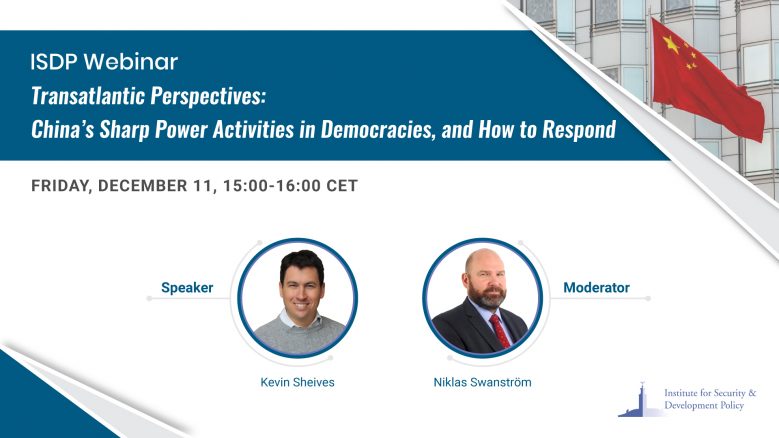 The effects of sharp power can corrode democracy, even democracies with the longest traditions and most stable institutions. As globalization deepens the integration between democracies and autocracies, the compromising effects of sharp power—a term describing how authoritarian governments can impair free expression, neutralize independent institutions, and distort the political environment—have grown apparent across crucial sectors of open societies. No power, besides China, presents a comparable set of challenges to democracy that pair economic and diplomatic power with global ambition and corrosive intent. Media independence, the freedom of intellectual inquiry, the stability of our information ecosystem, and economic activity free from coercion and corruption are all at play in the competition among China, other authoritarian influencers, and democratic systems.

Conceptualized, funded, and directed by the Chinese Communist Party (CCP), China’s sharp power activities may have outpaced – for now – the ability of our democratic institutions to adapt, but democracies also have both innate and novel ways to counter these challenges and help lead other democracies.

The Institute for Security and Development Policy is honored to host Mr. Kevin Sheives, Associate Director of the International Forum for Democratic Studies at the National Endowment for Democracy. Fresh from dealing with these challenges in the U.S. government and now helping lead the National Endowment for Democracy’s pioneering work addressing the global phenomenon of sharp power and authoritarian influence, Mr. Sheives will highlight how China is actively corroding democratic institutions in even the most advanced democracies in Northern Europe, Asia, the Pacific, and the United States – and how democracies can stand up and lead others. Mr. Sheives joined the Forum in August 2020. For nearly fifteen years, he served as a manager and advisor at State Department offices leading U.S. diplomatic and governmental responses to strategic competition with China, global disinformation, and the Asia-Pacific’s rise, along with assignments elsewhere in Washington at the Defense Department, the Office of the U.S. Trade Representative, and Congress.

This webinar will be moderated by ISDP’s Executive Director, Dr. Niklas Swanström.