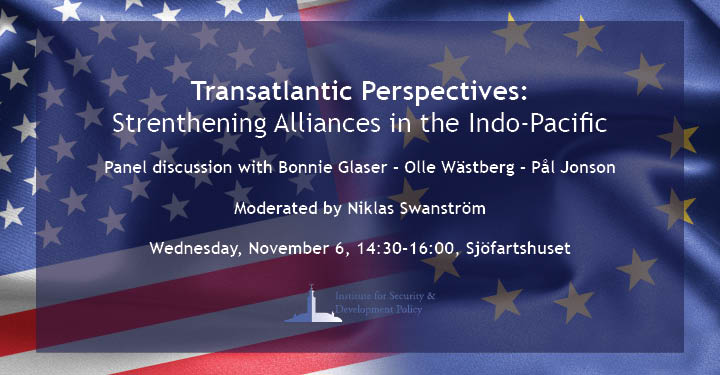 ISDP is pleased to announce the first event in our new Transatlantic Perspectives series, in which security policy and international relations experts from the United States will participate in public seminars with local counterparts and policymakers in Stockholm on issues of importance to the Transatlantic link between Europe and the U.S. The series is organized in cooperation with the U.S. Embassy in Sweden.

In this inaugural event of Transatlantic Perspectives, Ms. Bonnie Glaser, Senior Adviser for Asia and Director of the China Power Project at the Center for Strategic and International Studies (CSIS) in Washington, D.C. is joined in a panel discussion by Mr. Olle Wästberg, former State Secretary in the Ministry of Finance for the Liberal People’s Party and Swedish Consul General in New York; and Dr. Pål Jonsson, Deputy Vice Chairman of the Committee on European Union Affairs, Moderate party, Swedish Parliament.

The panel will zero in on the evolving security architecture in the Indo-Pacific and on the role Europe can play in supporting the existing alliance system in defense of the rules-based international order. Individual remarks by the panelists will be followed by a discussion session and Q&A with the audience. The event will be moderated by Dr. Niklas Swanström, Executive Director of ISDP.