Women in Politics: A Comparative Perspective of Sweden and Japan 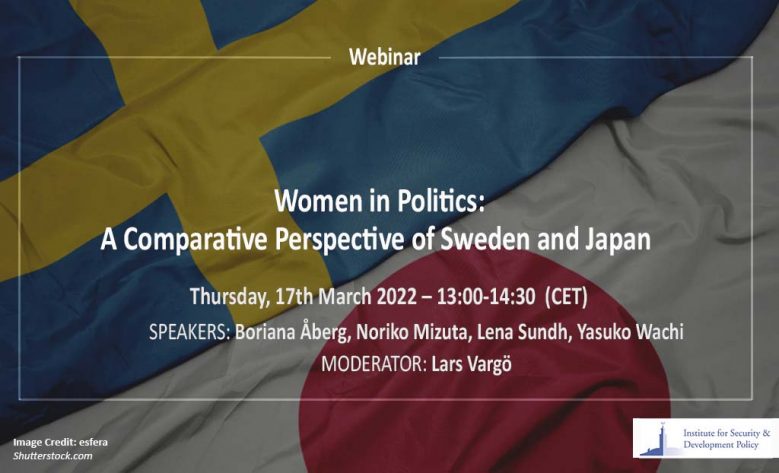 The Stockholm Japan Center is happy to host a discussion on the factors that have hindered and empowered women in parliamentary institutions, exchanging Swedish and Japanese perspectives. Taking stock of the 2021 general election in Japan and looking ahead to upcoming elections in both countries, please join us for an enlightening discussion with our distinguished guests.

Professor Noriko Mizuta – The Chancellor and President at the International Institute for Media and Women’s Studies. She holds a Ph.D. in American Studies from Yale University. Her research areas include women’s studies and comparative literature.

Ms. Lena Sundh – Retired Swedish diplomat who has also served in the UN. She has i.a  been ambassador to Angola, Special Envoy of Sweden to the Africa Great Lakes region and counsellor for political affairs at the Swedish Mission to the UN in New York.

Dr. Yasuko Wachi – Board member and vice president of the International Institute for Media and Women’s Studies. She holds a Ph.D. in anthropology from the University of California, San Diego.

Dr. Lars Vargö – Moderator Former Swedish Ambassador to Japan (2011-14) and South Korea (2006-11). He holds a Ph.D. in Japanese studies (history) from the University of Stockholm (1982). He graduated from Uppsala University 1972 with a major in sinology.