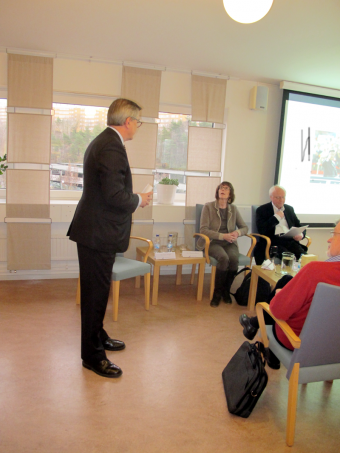 On Wednesday, January 27, 2016, the Institute for Security and Development Policy held a forum entitled “China and Japan Consigning History to History”.

The keynote speakers were Dr. Monica Braw, who worked for ten years as a foreign correspondent to Tokyo for the major Swedish newspaper Svenska Dagbladet and has published a number of books on Japanese history and on women’s role in Japan; Dr. Börje Ljunggren, former Swedish ambassador to China and Vietnam, currently responsible for the coordination of the Stockholm China Forum (GMF) on behalf of the Swedish Ministry for Foreign Affairs, and member of the board of Governors of Lund University and the Raoul Wallenberg Institute; and Dr. Lars Vargö, former Swedish Ambassador to Japan and South Korea and a Distinguished Fellow at ISDP.

In 2015, the world commemorated the seventieth anniversary of the end of World War Two. On this occasion, China manifested Japan’s defeat by the Allies and China’s rise with a spectacular military parade. Although China and Japan after the 1972 normalization for a long time enjoyed good bilateral relations, in recent years the world has seen increased tensions between Beijing and Tokyo. This ISDP forum focused on the role of history in the shaping of present Sino-Japanese relations and on the current security concerns in the region.
After a brief introduction of post-war relations, Dr. Börje Ljunggren highlighted the key points in the deterioration of relations from the Chinese perspective. He emphasized the unresolved issues surrounding China, with the conflict over Sekaka/Daiyou islands at the epicenter, as well as the concerns of growing nationalism and the promotion of identity politics. Dr. Monica Braw focused on Japan’s goal to become “a normal country” and the psychological effects of the war on Japanese society. The Japanese government has been criticized for strongly enhancing nationalism and fostering patriotism. However, according to Dr. Braw, although there is an increase in the nationalistic policies, the Japanese society remains largely convinced pacifists. Dr. Lars Vargö highlighted the Japanese view of history and how Japan sees itself as victims of war as well. Furthermore, Dr. Vargö focused on world’s impression of Japan becoming a militaristic country. As he highlighted, Tokyo has not been at war since the end of the Second World War and the ambition of Japanese politicians is to put an end to the post-war period and finally become a normal country. Dr. Ljunggren noted that history is not likely to come to rest.

ISDP would like to thank the speakers and audience who contributed to the success of the forum.