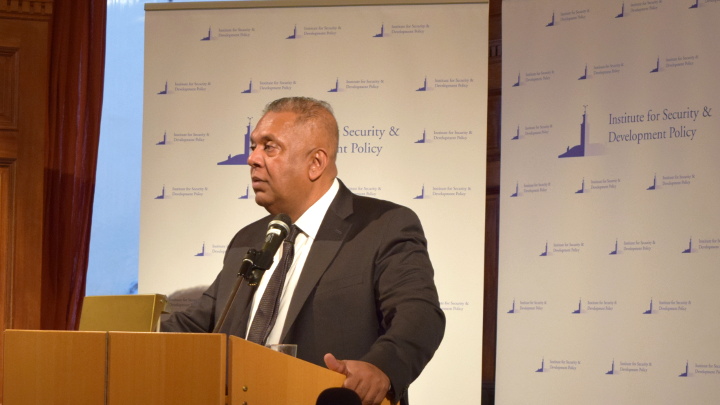 On January 18, 2017, the Institute for Security and Development Policy was pleased to welcome Hon. Mangala Samaraweera, Foreign Minister of Sri Lanka, for an event on Sri Lanka’s reconciliation process after the war. The event was held in co-operation with the Embassy of Sri Lanka in Stockholm.

Mr. Samaraweera started his speech by mentioning Sri Lanka’s prosperity after gaining independence in 1948 with its leading health, education, and democracy. Communal disharmony and groups of extreme nationalism brought this prosperity to a stop. However, significant improvement has been made since the end of the civil war. According to the Foreign Minister, the current leader and government are truly Sri Lankan, as they received support from the different communities in the country. The government has made considerable strides within two years, such as through the 19th Amendment to Sri Lanka’s Constitution and Right to Information Act.

Mr. Samaraweera continued by emphasizing the government’s commitment to the implementation of the Geneva resolution, which Sri Lanka also co-sponsored. He mentioned the steps that have been taken, such as the establishment of the Office on Missing Persons and truth-seeking mechanisms. Symbolic steps were small but significant measures that the government took to restore intergroup relations. Mr. Samaraweera acknowledged the importance to celebrate the country’s diversity, as the failure to accept it was the past’s mistake.

Mr. Samaraweera ended his talk by calling for the support of the international community. He named Sweden, which has common values with Sri Lanka, as an inspiration for moving forward.

The event continued with a Q&A session. The topics discussed were, amongst other, gender equality, Sri Lanka’s relationship with China and the U.S., and the risks and challenges faced in the reconciliation process.

ISDP would like to thank Hon. Mangala Samaraweera, the Embassy of Sri Lanka in Stockholm, as well as the audience for their participation in what was an enlightening discussion on a topic of high significance.

Find a transcript of the Minister’s speech here.