Summary and video of the ISDP Forum Troubled Waters? Energy Geopolitics in the Eastern Mediterranean 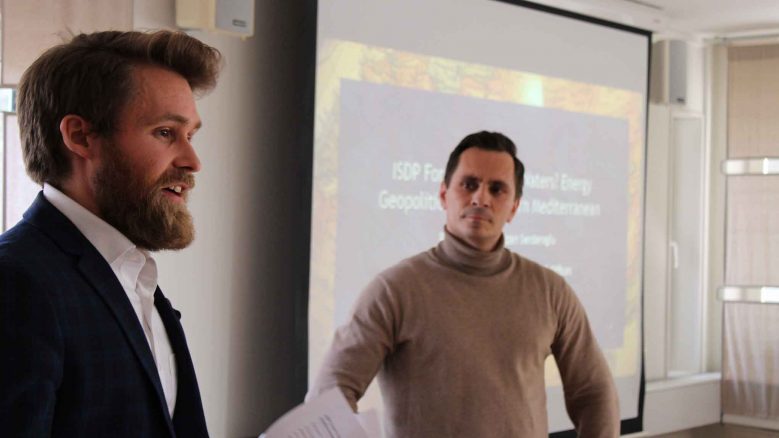 On April 04, 2019, ISDP hosted a public forum entitled “Troubled Waters? Energy Geopolitics in the Eastern Mediterranean”. With the discovery of natural gas reserves in the Eastern Mediterranean since 2009, a region long beset by rivalry and seemingly immutable socio-economic cleavages is now actively seeking to reconfigure its inter-state relations. This forum discussion set out to understand why, and how, natural energy resources are driving this regional reconfiguration process.

To open the forum, ISDP welcomed Dr. Ozan Serdaroglu, an Associated Fellow at the Institute, for a presentation reflecting upon these recent developments in energy cooperation and their potential to be a “game changer” in recalibrating geopolitical realities. The presentation was followed by a discussion, which was moderated by Erik Isaksson, Outreach Coordinator and Junior Research Fellow at ISDP.

Dr. Serdaroglu discussed the consequential geopolitical issues which accompany discoveries of natural gas reserves. Despite deep-rooted frictions, recent years have seen a positive trend towards improving regional relations in the Eastern Mediterranean. With new gas fields yielding considerable economic benefits for Greece and Israel in addition to Cyprus, the region is likely to increase its geopolitical leverage through energy cooperation. A positive side-effect of such an endeavor might be that previously tension-laden relations could be transformed into effective working relationships. Dr. Serdaroglu also remarked that recently Greece, Israel, and Cyprus signed agreements for energy cooperation cooperation relating to the EEZs of Egypt, Cyprus and Israel. This “energy triangle” has propounded the idea of exporting gas to the European Union, which shows more economic potential over their saturated domestic markets.

While the common denominator is a mutually beneficial strategy for energy cooperation, pre-existing points of contention have hindered progress. After all, as Dr. Serdaroglu went on to emphasize, frictions persist over delineations of exclusive economic zones, even among the energy triangle. While these frictions appear surmountable, the Cyprus factor raises the stakes. Turkey’s claims to the Northern part of the island have meant that Ankara will not condone further gas explorations in the Cypriot EEZ as well as the proposed pipeline to Europe. Additionally, the Greek Cypriot side has been able to diversify its diplomatic relations within the region whilst simultaneously increasing its leverage on becoming a prime energy hub, which Ankara has continuously sought to rein in. Therefore, without a stable situation on Cyprus, the potential positive effects of closer energy ties might not outweigh the risks related to unresolved disputes and contested waters.

Nonetheless, Dr. Serdaroglu expressed his optimism for closer ties to reshuffle the otherwise tension-ridden relations of the Eastern Mediterranean riparian states. Becoming increasingly interdependent, in energy terms, may provide impetus for a “solid framework for political cooperation”, which extends to other areas of mutual interest.

When asked about the current U.S. position on the energy triangle, Dr. Serdaroglu pointed out that the it might not view the gas reserves as significant enough for direct engagement. There could be an incentive for Washington to counter Russia’s growing sphere of influence, if prompted. For now, however, Russia, despite gaining ground in the region, does not seem to be of major concern for the energy triangle. In his concluding remarks, Dr. Serdaroglu stated that the key regional actors were already able to overcome a lack of diplomatic openings by formalizing cooperation in an area of mutual interest – energy resources.

ISDP would like to thank Dr. Ozan Serdaroglu and members of the audience for participating in the discussion.

Watch the video from the forum below.