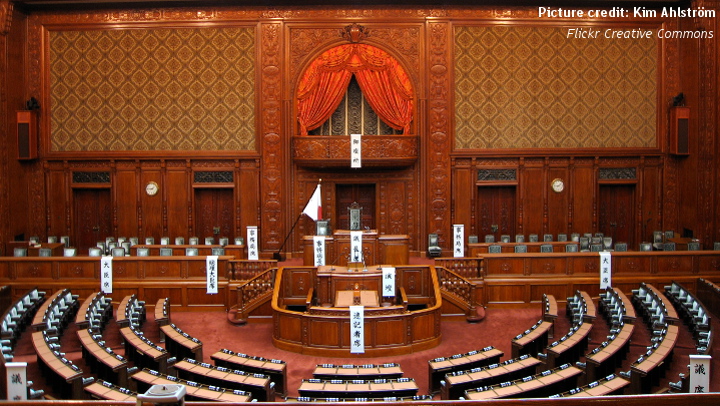 What is the general Western perception of Japanese politics?

Japanese politics do not gain much media attention in the West. Despite Japan’s status as the third largest economy in the world, knowledge about who’s who in the domestic political arena in Japan is not widespread. A known trait is a feeling of volatility which is implied by the relatively high number of Japanese politicians assassinated by dissidents during the first half of the 20th century as well as protectionist policies and the pacifist approach taken to foreign policy. The existence of this last policy has historical reasons, namely, the postwar introduction of Article 9 in the new Constitution of Japan outlawed war as a way of settling international disputes concerning the state. Still, what the Japanese political world is perhaps best known for is its perceived instability, with constant changes of political leaders the creation and dissolution of parties and frequent breakaways of factions and independent politicians alike.

Why would you say Japan is perceived that way?

Japan has had 27 prime ministers since the end of World War II. Each has averaged a total of 961 days in office, or roughly two and a half years. If one takes the constant reshuffling of cabinet ministers into consideration, in the post-war era Japan has had 54 different governments. This is certainly not a symbol of stability.  In comparison, Sweden has had 10 different prime ministers during the same period, whilst the US has had 12 presidents.

Is there any truth in these perceptions?

The argument can be made that the comparatively large number of post-war Japanese political parties and prime ministers suggests democratic instability, but there are certainly other dynamics at play.

The main reason is that the views of the individual politician are more important than the those of their political party. This is not to say that the political parties do not have an important role, but, quite often parties with completely different ideologies can support the same candidate. For instance, the governor of Tokyo was recently elected in spite of the fact that her party (the LDP) supported another candidate. The politicians are in constant contact with their constituencies and have to be very hard of hearing if the will of the voters is not taken in. If the political party has a policy that does not favor the constituency there is a strong pressure on the politician to distance her or himself from that party. Thus, there is always a temptation to create a new party.

Another reason is that Japanese politics is relatively complicated with a mixture of single-seat constituencies and proportional ones. General elections in Japan’s Lower House (Shûgiin, or the House of Representatives) are held every four years, unless dissolved earlier by the prime minister, which is usually the case. The Lower House has 475 members, of which 295 are from single-seat constituencies and 180 from proportional representation across eleven larger districts. Elections to the Upper House (Sangiin, or the House of Councilors) are held every three years, when half of the 242 seats are up for grabs.  146 of the seats are from single- or multi-seat constituencies, and 96 are proportional seats on a national level.  On top of this, local elections for prefectures, cities and villages are held every four years.

What are the distinguishing features of Japanese politics, and how does it differ from Sweden?

By comparison, Swedish constituencies are also of importance, but the politicians in Swedish Parliament tend to place more weight in the policies of their respective parties than to the voices of their local supporters. In the various dialogues between voters and their elected parliamentarians, those elected in Sweden pay perhaps more attention to what their parties want the voters to understand rather than the other way around.

Sweden does have something unique in its “Almedalen week”, when representatives of all parties in the middle of summer take turns in presenting their policies in a more relaxed manner. Whereas in Japan, it is almost always the voters who are explaining to the politicians what they have to understand.

Furthermore, televised political debates in Japan are much more frequent than in Sweden. During the relatively short official election campaign period in Japan candidates are given time slots on national TV to present their various policies. They are however presented in a strikingly boring manner in order not to create biased debates. There is no décor on the sets, a grey background and time slots are strictly adhered to. However, during every weekend of the year, the major broadcasting stations have hour-long morning programs where politicians of various affiliations discuss the issues of the day. Some ten representatives sit around a table and take turns in explaining why they believe what they do. Likewise, the powerful budget committee of the Lower House has almost daily hearings on a wide variety of subjects and is broadcast live on one of the major public television channels.

Japanese domestic politics has a tendency to be volatile when it comes to the number of political parties and government leaders, but Japan is definitely a stable democracy where the political dialogue between the voters and the ones they elect is both vibrant and real.

Dr. Lars Vargö is former Swedish Ambassador to Japan (2011-14) and South Korea (2006-11). He holds a Ph.D. in Japanese studies (history) from the University of Stockholm (1982). He graduated from Uppsala University 1972 with a major in sinology. In 1972-76 he was a repeat Mombusho scholar at Kyoto University. As a diplomat Vargö has returned to Japan four times, but has also served in Libya, Lithuania and the United States. 2001-2005 he served as Ambassador and Head of the International Department of the Swedish Parliament.