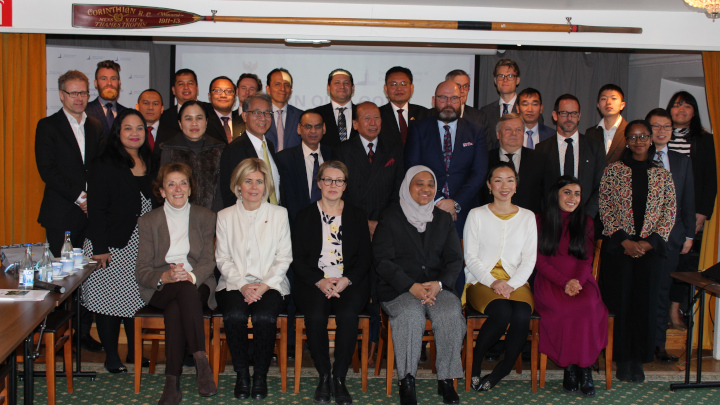 On November 06, 2019, ISDP co-hosted an event entitled; “ASEAN Outlook on the Indo-Pacific”, together with the Embassy of Indonesia to Sweden, the title made reference to an ASEAN policy document published in June. Beyond discussing what this document means to its stakeholders, the session addressed current issues within the ASEAN community, such as motivations for key actors, how ASEAN can collaborate multilaterally with other state actors and organizations, and the trade-bloc’s role in the future of international relations. The keynote speaker at the session was H.E. Mr. Soemadi Brotodiningrat, former Ambassador of Indonesia to the United States, Japan and international organizations in Geneva, and currently Senior Advisor to the Indonesian Minister of Defence and Member of the Board of the ASEAN-Europe Foundation.

The event began with a brief introduction from the Honourable Ambassador Bagas Hapsoro of Indonesia, who introduced the keynote speakers. Subsequently, Dr. Niklas Swanström, Director of ISDP, spoke of the importance of the Asia-Pacific, calling it the “region of the future”, and referenced its growing economic capabilities. He also emphasized how the region has many challenges to overcome, including the potential for clashes among the region´s countries. Against this background, Dr. Swanström noted the importance of ASEAN for maintaining stability in the region.

As the main orator of the session, Ambassador Soemadi began by describing how, within the last twenty years, the world order has evolved away from that of the 20th century, during which time the West, led by the U.S., was at the top of the global political and economic hierarchy. He noted that from here, a few trends can be discerned. For starters, multilateralism, a key fixture of a rule-based international order, is slowing down, leading to more unilateral measures undertaken by relevant countries. Secondly, emerging economies are showing a lot of potential and “riding the winds of globalization”. However, technological innovation has also led to a legal vacuum in certain areas of international collaboration, for instance with cybercrime. Finally, he noted that non-state actors are becoming increasingly important within the political and security arena.

Moving on to the Indo-Pacific, the Ambassador noted that the Indo-Pacific is an extremely multi-cultural region, and while it is showing a great deal of power both politically and economically, this growth co-exists with a number of problems. These include, but are not limited to, terrorism, as well as transnational disputes like than within the Korean Peninsula, the South China Sea, and Kashmir.

Subsequently, the Ambassador characterized the region as dynamic and discussed a series of ongoing initiatives in the Pacific, highlighting the Chinese Belt and Road Initiative, within which a number of different countries are already collaborating. He also described how several countries have been developing their Indo-Pacific strategies in recent years, among which were Australia, Japan, and India.

The Ambassador noted that his country, alongside Australia, is one of only two states that border both the Pacific and Indian Oceans. Indonesia has, since 2014, supported the idea voiced by its foreign minister that the Indo-Pacific should be a region in which no one power dominates and where no country is left behind, in which the Treaty of Amity and Cooperation (TAC) signed by ASEAN member-states should be used as a rallying point. This idea has been developed in subsequent initiatives promoted by the Indonesian government.

Subsequently, Ambassador Soemadi discussed how the ASEAN Outlook is so named so as indicate its flexibility and to distinguish it from a rigid position or statement. It aims to promote the Indo-Pacific as a set of interconnected spaces, and a region of dialogue rather than rivalry. ASEAN should work by offering guidance to this cooperation, driven by a series of internationally recognized principles and rules, like UNCLOS. In addition, the Ambassador once more highlighted the need for TAC to be used as a means to solve disputes peacefully.

Finally, Ambassador Soemadi summarized his own views on the discussion. While he agreed that the world-order is shifting to the Indo-Pacific, he believed that ASEAN needs to be active to avoid losing its head start to other initiatives.  Moreover, the trading bloc must not allow rivalry among major powers to threaten ASEAN unity. His final point was that ASEAN believes in a rule-based order and respects international law. Thus, it is against ASEAN principles to condone containment acts against China, instead, it is better for ASEAN to engage rather than to isolate.

The Ambassador then gave the word back to Dr. Niklas Swanström, who opened the table up for discussion. The themes of which focused on in what way the West can able to collaborate to ASEAN´s Outlook; market openness in the Pacific; past and upcoming ASEAN meetings and the participation of the U.S. throughout them.