Summary and Video of the ISDP Forum China-Europe Relations – Toward Reconciling Diverging Interests? 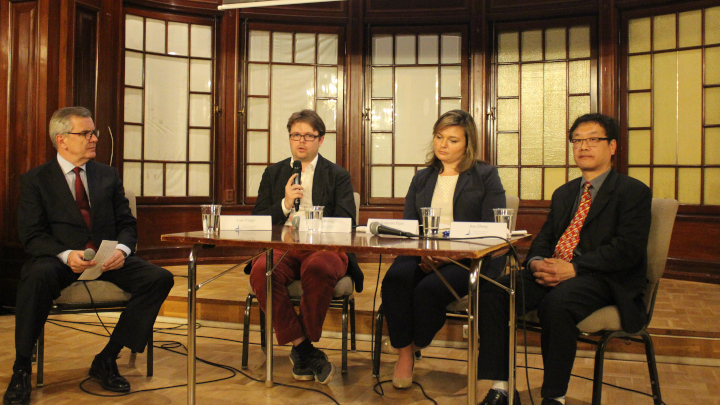 On November 8, 2018, ISDP organized a forum at Citykonditoriet in Stockholm, “China-Europe Relations – Toward Reconciling Diverging Interests?” moderated by Dr Lars Vargö of ISDP. The forum featured an opening speech by H.E. Ambassador Gui Congyou of China on the 40th anniversary of China’s reform and opening up, as well as the steady growth of its bilateral relations with Sweden, the first Western country to establish diplomatic relations with the People’s Republic of China on May 9, 1950.

“Despite political and ideological differences, continuous dialogue and exchange of ideas have always functioned as boosters of bilateral ties in the areas of development, peace, and security.” stated Ambassador Gui.

The second part of the forum presented a panel discussion with Dr Jian Zhang of the University of New South Wales Canberra, Ms Katherine Elgin of Princeton University, and Mr Tim Rühlig of the Swedish Institute of International Affairs. Considering fundamental differences in history, values, and interests, it is important to acknowledge the existence of an inevitable perception gap between Europe and China, hold realistic expectations about the extent of mutual understanding, and utilize strategic thinking for communicating and minimizing those differences. When it comes to the Belt and Road Initiative (BRI), the project holds many potential benefits for China-Europe relations as a systematic platform for cooperation and dialogue. At the same time, it presents certain risks in terms of the European Union’s values, such as democracy, human rights, and sustainable development.

The Forum ended with a short Q&A session with the panelists, mostly focusing on the possible effects of the US trade protectionism on EU-China relations.

Watch the full video of the forum here or below.