Summary and Video of the ISDP Forum China’s Strategic Priorities – Change or Continuity? 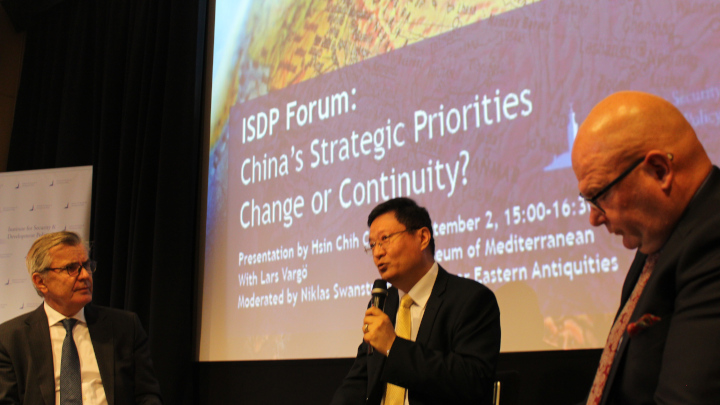 On September 2, 2019, ISDP hosted a public forum, on the topic China’s Strategic priorities – change or continuity? The main speaker of the event was Professor Hsih Chih Chen from the National Cheng Kung University in Taiwan. Following Dr Chen’s speech, a discussion was carried out by Dr. Lars Vargö, former Ambassador of Sweden to Japan and South Korea and Distinguished Fellow at ISDP. The session was concluded by a Q&A session moderated by the Executive Director of ISDP, Dr Niklas Swanstrom.

Dr Chen commenced the session with his presentation, remarking on the role of perception in relations between Sweden and China. His presentation highlighted five main aspects – the PRC’s core interests in global power shifting, President Xi’s map for national rejuvenation, China’s strategy to restore ‘great power status’, the US’s role in suppressing the rise of China, and Sweden’s and the EU’s role in framing their relationship with China.

He emphasized the fact that the PRC’s core interests were state sovereignty and ensuring national security. This, coupled with national reunification and the overall Chinese political system serve as the basis upon which China frames its foreign affairs. Dr Chen displayed statistics on Global Trends for 2030 from the National Intelligence Council, predicting the decline of the United States, indicating China overtaking the US in terms of GDP growth by 2030. He stated that 2030-2060 would be a period of ‘great competition’, between the two economic powers. Speaking in terms of ‘global power shifting’, Dr Chen spoke of how emerging power China, would challenge status quo institutions in order to promote Chinese interests and status. This could potentially intensify conflict, resulting in a Chinese hegemonic order. He stated that China, under the leadership of President Xi, is attempting to forge an unchallengeable status, and reshape economic institutions by enhancing economic interdependence through stronger bilateral relations. He gave the examples of the Belt and Road Initiative, the 16+1 framework, South East Asian and Central Asian hedging policy, as well as the comprehensive engagement with Russia.

Dr Chen then proceeded to highlight the role of the US, in the attempted ‘suppression’ of China. He referenced the National Defense Strategy from 2018 published by the U.S’s Department of Defense (DoD), and how it referred to Russia and China as ‘revisionist powers’. He believes that this is an admission of the failure to transform China down the liberal route, by the Trump administration. He referred to the tariff sanctions, which have been met with retaliatory measures from China. This has consequently resulted in a Chinese economic isolation policy towards the US, lowering import tariffs from other countries and thereby opening up its market to the rest of the world. According to Dr Chen, the ongoing trade war may even last for decades, and affect global trade deeply. He believes that Beijing will continue to develop strategies in order to sustain this competition, focusing on material interest disputes, instead of ideological ones. He concluded his presentation by remarking on the effects of Chinese ascension on Sweden and the rest of the world, fearing rising geopolitical tensions, increasing competition in all sectors, and the possibility of the global market turning into an ‘inward market’.

After Dr Chen’s presentation, Dr Lars Vargö emphasized the importance of going over history in order to understand how modern Chinese leaders think, and how contemporary China functions. The role of the WTO was brought to light, whereby it was understood that China’s compliance with WTO rules would appeal to Sweden and the rest of the EU. This creates a golden opportunity for China to diversify its relations in the international arena. In terms of the Swedish view on China, it was explained that certain aspects of the picture are left unaccounted for, as is the case with Chinese leaders, who hold certain biases in viewing Europe and its development. Dr Swanström added that it was important to question what the 16+1, 18+1 groupings mean for Europe. This can be perceived as an opportunity by both sides, with China attempting to diversify relations, and Eastern European nations benefiting in return.

The last section of the forum consisted of a highly engaging Q&A session, with questions ranging from the Hong Kong crisis, the importance of demographics, the ongoing Confucian renaissance, the role of Russia and India, the possibility of the evolution of priorities, and strategic priorities outside of the economic domain. It was agreed that the China-Russia partnership is a great concern, and that the strength of military power in the world today would deter the use of force in order to establish hegemonic power – leaving economic and bilateral cooperation as the only option. The session was concluded by remarks from Dr Chen on the impossibility to predict the Chinese trajectory in the long term, indicating that only time will tell.

ISDP would like to thank Dr Hsih Chih Chen for his engaging presentation, as well the audience members for their participation in the forum.