Summary and Video of the ISDP Forum Chinese Investment, Infrastructure and Influence in Europe – the Global Context 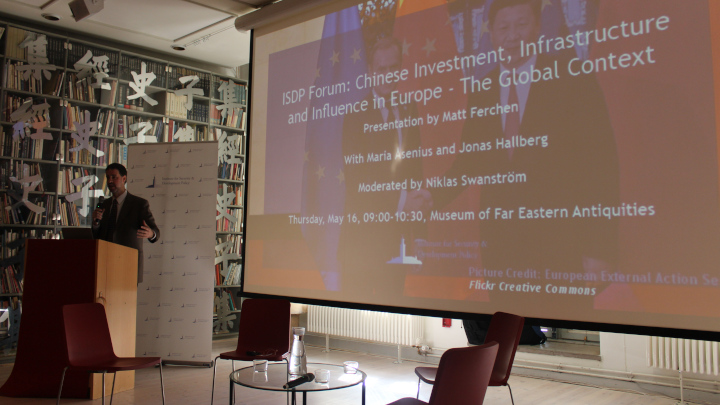 On May 16, 2019, ISDP hosted a forum entitled; “Chinese Investment, Infrastructure and Influence in Europe – the Global Context”.

For the initial keynote presentation, ISDP welcomed Dr. Matt Ferchen, a non-resident scholar at the Carnegie-Tsinghua Center for Global Policy. Following his presentation, Dr. Ferchen took part in a panel discussion with Ms. Maria Åsenius, Head of Cabinet for the EU Commissioner for Trade and Mr. Jonas Hallberg, Trade Policy Adviser and Legal Adviser at the National Board of Trade of Sweden. The Forum was moderated by Dr. Niklas Swanström, Executive Director of ISDP.

A new consensus has emerged between the United States and the EU on relations to China. The U.S. and the EU generally agree on the need to pushback on China, an approach well exemplified with the EU’s choice to rename China a “systemic rival” rather than a strategic partner, prior to EU-China Summit in April this year. In his presentation, Dr. Ferchen focused on identifying the drivers behind the consensus.

He identified five key drivers, namely; concerns from the business community related to market access, technology transfer, intellectual property rights and investment policies; security related concerns, such as China’s use of geo-economics through the Belt and Road initiative; human rights concerns, such as the use of advanced technology for surveillance; concerns in academia on restrictions of academic freedom; and lastly, concerns from the media of the mistreatment of journalists within China.

Upon this characterization, Dr. Ferchen discussed the challenges and contradictions within the consensus. He pointed out that while actors in the U.S. and the EU can agree on identifying key problems, disagreements exist when it comes to recognizing whether an issue is a reasonable business interests or a security threat. Moreover, there are currently too few solutions being brought forward on how to confront the risks which are identified. Lastly, Dr. Ferchen criticized the current consensus as being too pessimistic, short term, and overly defensive.

In the panel discussion, Ms. Åsenius stated that the EU Commission agreed with the U.S. analysis of the root causes of the problems when dealing China. However, she expressed worry, on behalf of the EU Commission, in terms of the growing conflict between the U.S. and China. As very little information is leaked from economic negotiations, there is no clear indication of the potential outcome.

When it came to more direct debates about the EU, the panelists discussed protection measures such as investment screening mechanisms. Dr. Ferchen advocated that an investment screening process in the EU should span across all member states in order to be truly effective. Ms. Åsenius pointed to the fact that the EU had agreed upon the need to install screening mechanisms in record time, though that these joint security measurements often clash with issues of national sovereignty. Mr. Hallberg mapped out Scandinavia as an example of the diversity in approaches which currently dominates decisions related to installing investment screening in Europe.

The event ended with a brief Q&A, in which both Dr. Ferchen and Ms. Åsenius reiterated the need to not jump to pessimistic and deterministic conclusions on future developments within China and on its relations with other economies. As an example, they pointed to the argument that even though China is currently not a true market economy, which is a problem for Western market economies engaging with China, their economic model is starting to fail them. This could even push Beijing to reform if the right conditions are set by their biggest trading partners.

ISDP would like to thank Dr. Ferchen, the panelists, and members of the audience for participating in the discussion.

Watch the video of the forum here.