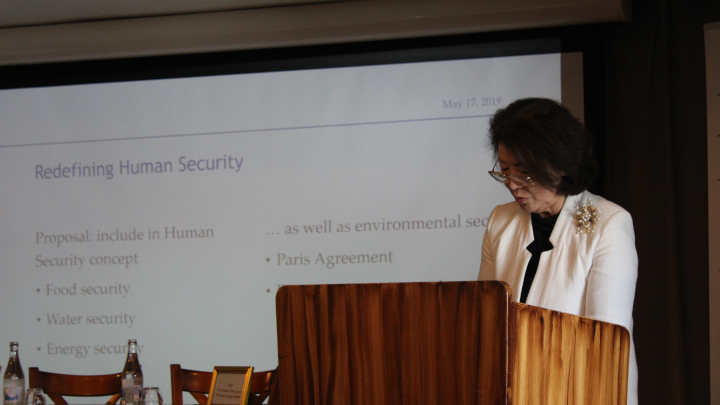 To open the forum, ISDP welcomed Professor Akiko Yamanaka, Special Advisor to the President of the Economic Research Institute for ASEAN and East Asia (ERIA), for a presentation reflecting Japan’s take on the concept of Human Security and the domestic challenges to human security that the country currently faces. The presentation was followed by a panel discussion with Ambassador Per Enarsson, Head of the Conflict and Humanitarian Affairs Department at the Swedish Ministry of Foreign Affairs. The discussion was moderated by Dr. Lars Vargö, Head of the ISDP Stockholm Japan Center, and followed by a short Q&A session.

Ever since its official introduction in a UNDP report in 1994, the concept of human security has been a cornerstone in Japan’s UN-centered foreign policy approach. Yet, as Prof. Yamanaka pointed out, the concept needs a reappraisal. As global dynamics shift, human security can no longer be effectively addressed in narrow terms. Coming from Japan, a nation faced with a multitude of domestic challenges to human security, the bracket term will have to be broadened to include water, food, energy as well as environmental security. Therefore, the forum’s main discussion centered around how to achieve inclusive human security and Japan’s role to attain such goal.

A key theme discussed by Prof. Yamanaka was the role preventive diplomacy can play in tackling human security. There is a growing need to establish global networks to effectively deal with transnational threats, including multilateral institutions. This could encompass cross-country education and training as well as sharing of, and learning from, experience. As a nation vulnerable to natural disasters, including tsunamis, Japan has been at the forefront in establishing training mechanisms for nationals from countries facing similar challenges. Citing an initiative to entice students to spread awareness about tsunamis, Japan has been inviting high school students from tsunami-prone countries to visit Japanese cities that have been hit by this natural disaster. Sending these students back as “ambassadors” for their local communities, according to Prof. Yamanaka, has proven to be a successful enterprise.

In her concluding remarks, Professor Yamanaka reiterated that social resilience needs to be fostered. Only via strong communities with shared interests can the concept of human security reach acceptance and deliver concrete results beyond rhetorical commitment.

Both Prof. Yamanaka and Ambassador Enarsson voiced concern over established multilateral approaches to human security being scrutinized and subordinated to national interests. Ambassador Enarsson went one step further and criticized the lack of international vision besetting the human security debate. While he thought it was worth institutionalizing human security practices at the global level, he hinted upon the local level as the ultimate authority to tackle human security challenges. As such, recalibrating efforts to concrete partnerships, including cross-country and city-to-city, would prove more fruitful than a top-down, one-size-fits-all approach.

When asked whether the concept of human security is too vague to be valuable, Prof. Yamanaka was adamant that the broad nature of the term is a strength rather than a weakness. However, she added that for the concept to find more proponents, the UN itself, and the Security Council in particular, would benefit from an internal reform to make the process of establishing common rules more democratic.

ISDP would like to thank Professor Akiko Yamanaka, Ambassador Per Enarsson and members of the audience for participating in the discussion.