Summary and Videos of the ISDP Forum Japan in the World – Toward a Larger Role? 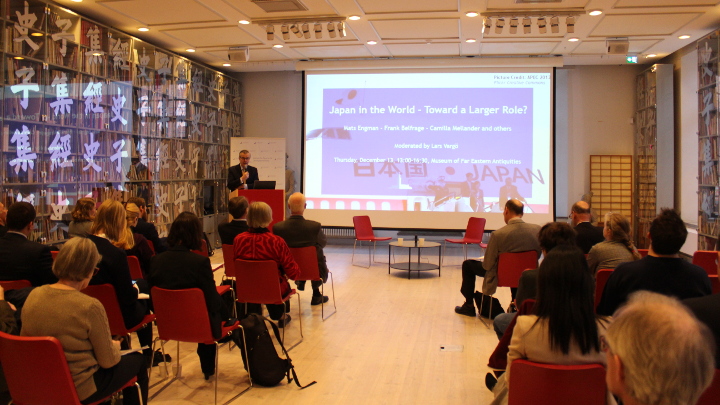 During the first panel on politics and security in East Asia, Major General Engman discussed Japan’s security and military strategy, as it continues to face a rapidly developing and modernized Chinese military; North Korea’s nuclear and missile capabilities; lingering uncertainty over U.S. withdrawal from the Asia-Pacific; non-traditional threats in cybersecurity, climate change, and the spillover effect triggered by conflicts around the world. More specifically, according to Maj Gen Engman, Japan should a) take on larger roles in Self-Defense Forces (SDF) deployment to UN peacekeeping missions with an emphasis on modern niche capabilities; b) leave the historical legacy behind; c) retain a combined command with the U.S.; d) take an assertive lead in building a regional security architecture.

As a cultural superpower scoring the high points in nation branding rankings, Professor Kawasaki pointed out, Japan bears a significant soft power potential in standing up to the threats rising from China and North Korea. In addition, Japan and Sweden share a number of common interests in relation to sustainable development goals such as ageing society, education, diversion and equality, altruism, and innovation.

In regards to Japan’s economic leadership, Ambassador Mellander opened the second seminar by honoring the Japanese efforts in championing free trade, particularly in terms of the EU-Japan Economic Partnership Agreement, finalized on December 8, 2018. Ambassador Belfrage stressed the importance of  Prime Minister Shinzo Abe taking the lead in negotiating the Comprehensive and Progressive Agreement for Trans-Pacific Partnership (TPP-11) which will work as an antidote against U.S. protectionism and create a window of opportunity in establishing a free trade framework in the region.

The presentations were followed by a discussion around Japan’s potential leadership in reforming the World Trade Organization; Sweden’s trade and economic relations with Japan and China; the future of Swedish-Japanese cooperation in science, biotechnology, IT, and telecom sectors and the role of Chinese investment. The forum concluded with a Q&A session with the audience.

Watch the videos from the two panels here, or below.