Summary of the ISDP Forum: The International Politics of the Armenian-Azerbaijani Conflict 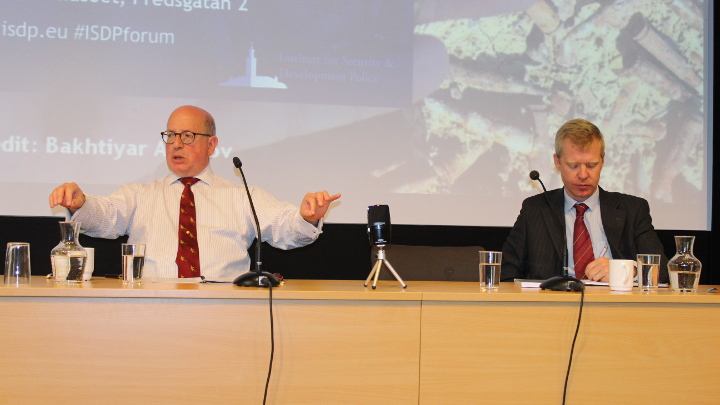 On June 13, 2017, the Institute for Security and Development Policy welcomed James Sherr, Associate Fellow and former Head of the Russia and Eurasia Programme of Chatham House, and Svante Cornell, Director of ISDP, for a discussion on the international politics of the Armenian-Azerbaijani conflict, including the role of the EU, and Russia. The event was held at the Mediterranean Museum, and was moderated by Mr. Alec Forss, Editor/Publications Manager at ISDP.

Dr. Cornell opened by introducing the recently published monograph The International Politics of the Armenian-Azerbaijani Conflict. Despite the Nagorno-Karabakh clashes of April 2016, he emphasized, that international attention on the conflict continues to be very low. The EU, in particular, should pay greater attention to this conflict than it has so far, for several reasons: it is on a path of escalation, existing mediation regimes are dysfunctional, and any outbreak of serious fighting would force the EU to respond. However, the EU has so far demonstrated that it does not possess a single consistent policy on the issue and merely promised support in event that a negotiated solution is reached.

Although it is often referred to as the “Nagorno-Karabakh conflict”, Dr. Cornell explained, the title of this book defines it as the “Armenian-Azerbaijani conflict” as it is too simplistic to consider it to be only a local territorial conflict. To understand the complexity of this conflict, it is essential to take into account its different levels: 1) as mentioned above, a conflict over a territory; 2) a conflict between states; and 3) a geopolitical conflict, in which the interests of Russia, Turkey, Iran, the EU and the United States are intertwined. Although the region experienced a relative stability from 1994 to 2008, in parallel with growing instability in the Caucasus, the Armenian-Azerbaijani conflict re-entered a path of escalation since 2008. There is an unbalance of powers between the countries, Dr. Cornell argued, in favor of the country which lost the war, Azerbaijan. From the Azerbaijani point of view, Dr. Cornell suggested, escalating the conflict is the only way to change the status quo and attract international attention. On the other hand, for the Armenians it is more advantageous to pursue a strategy of deterrence.

Mr. Sherr continued by focusing on the geopolitical context of the conflict. The legacy of the imperial Russia and the Soviet Union, he argued, continue to matter in this region. Every country is aware that Russia will always be nearby, while the US will always be far away. Russia has important interests in the region, and when a conflict between two countries breaks out, will attempt to gain influence over both sides. Russia is capable to react extremely swiftly to events, and it is able to offer protection to other countries. For these reasons, both the Armenians and the Azeri have learnt how to make contacts inside the Kremlin. On the one hand, it may seem that the Armenians are the stronger ally with Russia; however, Russia is more in favor of the kind of governance present in Azerbaijan. Mr. Sherr concluded by reminding the audience that Russia has no interest in a new full-scale conflict between Azerbaijan and Armenia, and the only ones who may benefit from a total victory would be either the Azeri or the Armenians.

ISDP thanks James Sherr, Svante Cornell, Alec Forss and all members of the audience for joining in the discussion.