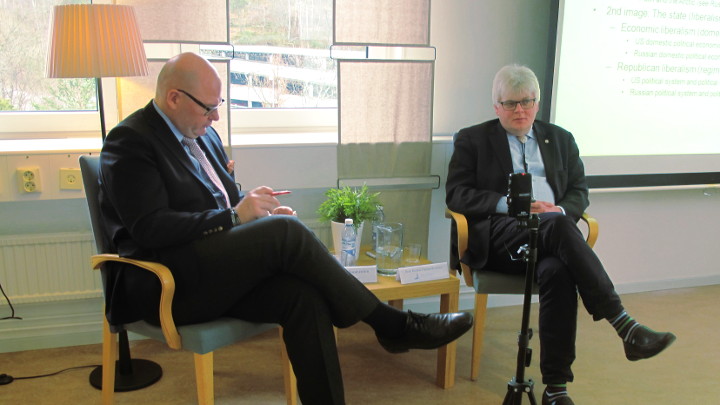 On March 3, 2017, the Institute for Security and Development Policy welcomed Dr. Rasmus Gjedssø Bertelsen for a presentation on ‘Domestic Disruption and Geopolitical Continuity – The Arctic Under Trump.’ The event was moderated by Dr. Niklas Swanström, Director of ISDP.

Dr. Bertelsen started his presentation by covering how international relations have had a major historic presence in the Arctic region, with specific examples being the militarization of the Arctic in World War Two and the Cold War. With these two examples, he eloquently demonstrated that the Arctic is affected by great power conflicts, as a consequence of its strategic location, rather than being the driver for conflict itself. Developing the example of the Cold War and the Arctic, Dr. Bertelsen articulated that the Arctic was subject to the installation of early warning systems; air patrols; and offensive capability by both the USA and the USSR. Consequently, the Arctic was affected by extreme militarization, due to its location, rather than conflict over the presence of natural resources (given that the natural resources are in undisputed zones).

Dr. Bertelsen continues by developing the theme of domestic disruption and systemic continuity in the Arctic. The Arctic’s role in the relationship between Russia and the U.S will continue to be defined by nuclear weapons, and given its strategic position, the Arctic will continue to be militarized, regardless of domestic changes in U.S., he argued. Furthermore, Russia, as a fossil fuel based (rent seeking) economy, continues and will continue to exploit fossil fuels in the Arctic region. Dr. Bertelsen argued that a continuation of this Russian policy is essential for regime survival, as it profits the elite, and fuels the nation’s economy. Thereby, Dr. Bertelsen introduced the concept that domestic politics can shape foreign policy.

Dr. Bertelsen moved on to discuss the elements of change. Developing the point that the pivot of U.S.’ policy from the Obama administration’s relative focus on green energy, to a fossil fuel centric energy policy under Trump, he argued that this implies that the Trump administration will likely focus on exploiting fossil fuels. Dr. Bertelsen argued that influential Trump supporters to a large extent will not benefit from green energy production, as they are often heavily invested in fossil fuel production, as seen in the example of U.S. State Secretary’s Rex Tillerson’s engagement in ExxonMobile. This further serves to prove how domestic politics influence on foreign policy.

ISDP thanks Dr. Bertelsen for a very interesting presentation, and all members of the audience for joining in the discussion.