Summary of the ISDP Forum “Japan as a Global Actor” 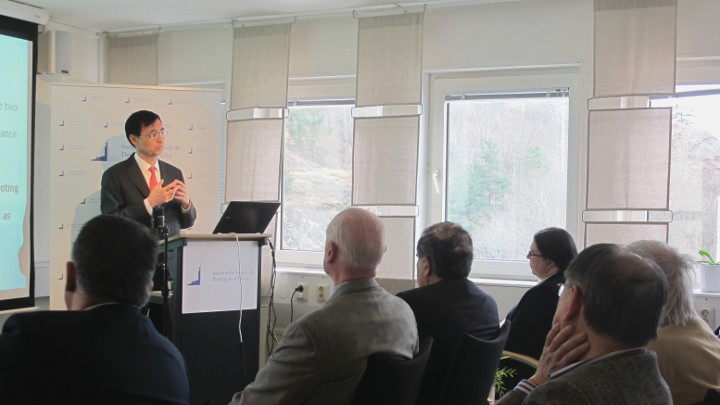 On April 6, 2017, the Institute for Security and Development Policy welcomed Ambassador Jun Yamazaki, Ambassador of Japan to Sweden, for a presentation on Japan as a global actor. The event was moderated by Dr. Lars Vargö, Distinguished Fellow at ISDP.

Ambassador Yamazaki opened by announcing the 150th anniversary of the diplomatic relations between Sweden and Japan, two countries which share important values and interests. One commonly important ground for Japan and Sweden is the promotion of gender equality and women’s empowerment. Japan is trying to increase the number of women in decision-making positions, although this might become a long-term process. Other sectors that Sweden and Japan attach importance to, include S&T technology and innovation.

Ambassador Yamazaki continued by reminding the audience that Prime Minister of Japan Shinzo Abe visited Europe in March, underlining the importance of relations between Japan and the European Union. Central issues discussed during his visit included continued support to free-trade and maritime security, Brexit negotiations, Japan-EU Economic Partnership Agreement, and the importance of trilateral cooperation between Japan, the EU, and the US.

With regard to Japan-US relations, Ambassador Yamazaki pointed out that the two leaders were able to establish a relationship of strong mutual trust through a frank discussion during the first official visit by Prime Minister Abe to the US in February. The Ambassador then underlined that the US-Japan alliance is the cornerstone of peace and prosperity in the Asia-Pacific, and that the US is committed to defending Japan and will strengthen its presence in the region. Japan in its turn will assume a larger role within the Alliance. In the area of economic relations, the Ambassador pointed out that the two leaders had reaffirmed the importance of expanding their mutual trade and investment relations while continuing efforts to promote trade, economic growth, and higher living standards throughout the Asia-Pacific region. The Ambassador emphasized that a new channel for bilateral economic dialogue was established and will soon have its first meeting on the level of the US Vice President and the Japanese Deputy Prime Minister, who is also the Minister of Finance.

The forum was concluded with a Q&A session, during which Ambassador Yamazaki answered questions on the relations between Japan and China, the increasing tensions in the Korean Peninsula, “womenomics” and how to deal with President Trump’s protectionist tendencies.

Watch the video of the event here.