Summary of the ISDP Forum Security for Japan: Foreign Policy Challenges on the Korean Peninsula 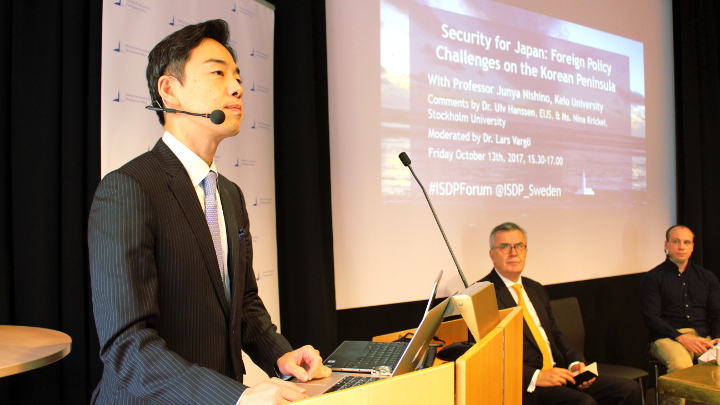 Professor Nishino, a specialist in Japan-ROK relations, delivered a presentation beginning with an explanation of Japan’s ‘three-pillared’ approach to the DPRK. Firstly, Japan has pursued engagement and dialogue, which can be seen in events such as the 2002 Pyongyang Declaration, 6-party talks aimed at finding solutions to security concerns in Northeast Asia, and the 2014 Stockholm Agreement. Secondly, Japan has supported the use of pressure by imposing unilateral sanctions and supporting UN Security Council sanctions against North Korea for its nuclear program. Thirdly, it has promoted defense and deterrence by working with the United States and South Korea as part of a ‘defense triangle’. Professor Nishino emphasized the need for a strong Japan-ROK relationship in order to confront the threat emanating from the DPRK.

The professor then detailed the history and current state of Japan-ROK relations and obstacles to their improvement. Beginning with the Treaty on Basic Relations in 1965, Japan and South Korea have made considerable progress in the form of bilateral cooperation agreements. However, although progress has also been made in reconciling a painful past, debates over historical issues persist. This, combined with very different perceptions of the USA and China amongst South Koreans and Japanese, has put up obstacles in Japan-ROK cooperation.

Thus, Professor Nishino recommends attempts to narrow the ‘perception gap’ between Japan and the ROK and closer strategic cooperation in for both countries to better work together to address issues associated with the DPRK. After the talk, Professor Nishino joined Dr. Ulv Hanssen and Ms. Nina Krickel in a panel discussion moderated by Dr. Lars Vargö, Distinguished Fellow at ISDP and former Swedish Ambassador to Japan and South Korea. The Question and Answer session then opened up to the wider audience. Issues discussed included the effectiveness of sanctions against the DPRK, Japan’s vulnerability and potentially unique negotiating position in regards to Japan, and prospects for peace on the Korean Peninsula.