Summary and Video of the ISDP Forum “A Struggle for Hearts and Minds: Combatting Violent Extremism” 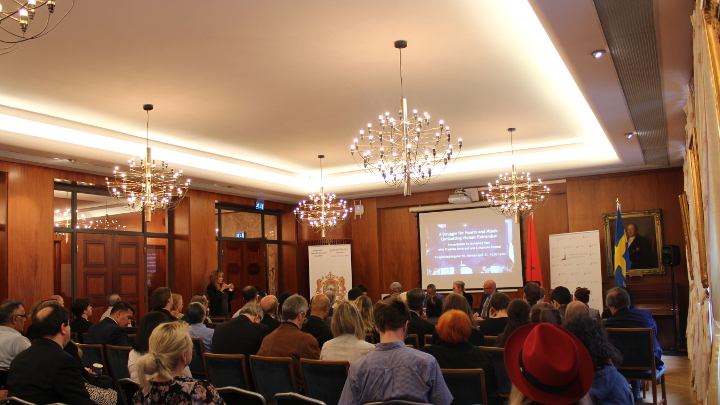 On April 23, 2018, ISDP hosted a forum at the Jernkontoret conference center in Stockholm, on combatting violent extremism. The event was held in coordination with the Moroccan Embassy in Stockholm, and featured a number of experts on counter-terrorism and Islamic extremism. The forum was moderated by Dr Niklas Swanström, Executive Director of ISDP.

Introductory remarks were given by Ms. Amina Bouayach, the Ambassador of Morocco to Sweden. She spoke in favor of diversity and said there were lessons to be learnt from her country’s first-hand experience of terrorism. Ms. Bouayach noted that Morocco’s unique stance on this issue in the Islamic world made it a good example for those seeking to combat terrorism in the region as well as further afield in Europe.

Professor Mohamed Tozy, of Sciences Po Aix, said there were no easy solutions to preventing terrorism. In his view, a number of factors have contributed to the issue of violent extremism. First, that religions have become increasingly ideological. Second, that geopolitics has played a large role in stoking tensions, for example with certain countries funding extremist organisations. Professor Tozy then argued against the assumption that poverty and deprivation are the leading causes of radicalization amongst young people. He said there are many examples of well-educated individuals having supported and commanded terrorist organisations around the world. He finally pointed to the internationalization of terrorist groups such as ISIS, which has become an increasing feature of modern extremism.

Ms. Fredrika Ornbrant, Ambassador and Counter Terrorism Coordinator at the Swedish Ministry for Foreign Affairs, reflected on the major terror attack that Stockholm faced in April 2017. She spoke of the challenges Sweden faced from individuals fighting for terror groups abroad, such as in Iraq and Syria, and the difficulties in reintegrating them into society on their return. Greater domestic inter-agency cooperation, of the type Sweden has legislated on, was cited as one way of dealing with violent extremism. Ms. Ornbrant also stated that this type of collobration was needed between international organizations at the global level.

Dr. El Mostafa Rezrazi, Professor of Crisis Management and Senior Fellow at the OPC Policy Center, was the final speaker. He noted the importance of deradicalization, especially in prisons, which had contributed in his view to the absence of a major terror attack in Morocco since 2011. Dr. Rezrazi cautioned, however, that solutions such as removing citizenship from individuals who have fought abroad was problematic. Though this has been implemented in a number of countries, including some in Europe, individuals punished in this way have often stayed on as senior figures in terrorist groups, as they have no option of returning home to reintegrate.

The forum ended with an open Q&A session, which covered the following topics:

Watch the video from the event here, or below.