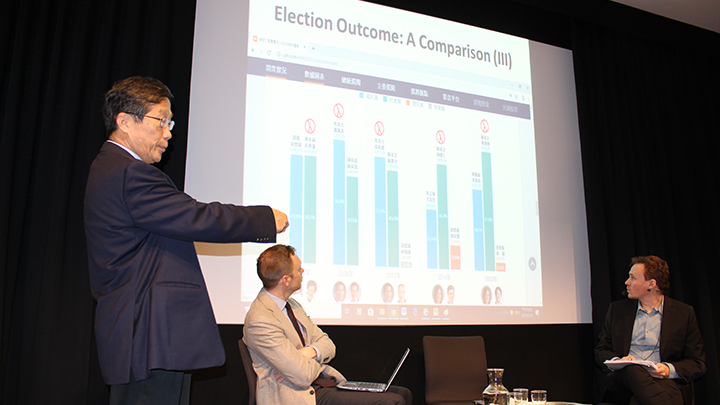 Dr. Ding began his presentation by introducing his views on why the election in Taiwan was important, citing four reasons. First, U.S.-China competition is spilling over into the elections, making them battlegrounds for larger issues. Second and related to this, they are useful for actors like China and the U.S. in testing cyber operations with political influencing goals. Third, they have a bearing on identity issues in China such as Xinjiang and Hong Kong. Fourth, the Kuomintang (KMT) and Democratic Progressive Party (DPP) have different geopolitical allegiances, which means much for geopolitics in the region.

In going through the results of the election, Dr. Ding noted that the DPP has made major progress since its slump in 2018, but that the KTM has also grown, with the largest party in the election having made the biggest loss of support. This is partly an effect of the two largest parties being favored in presidential elections. In the election to the Legislative Yuan, the third largest party did better.

According to Dr. Ding, several external and internal factors contributed to the results. For example, China’s handling of the Hong Kong protesters – which are supported by 72 percent of the Taiwanese population according to polls – has made many people throw their support behind the Tsai government. Also, U.S. support for Taiwan’s position probably made a difference. In 2019, Donald Trump approved a big arms sale to Taiwan, and Congress has ratified a number of acts expressing support for the country. Furthermore, support is split with high numbers for Tsai Ing-wen personally, but low support for the DPP. Those under 40 tend to be more supportive of the incumbent.

As for the reasons for the KMT’s loss, Dr. Ding explained, expectations were set too high after the 2018 local elections, and the party itself split in the time between that election and now. The party also nominated a very weak candidate in Han Guo-yu – an emotional person perceived as too pro-China. Dr. Ding emphasized again the importance of the Hong Kong factor and further made the point that the KMT fielded weak candidates across the board. The KMT needs to have generational change and renew itself, lest the DPP might become the Taiwanese equivalent of Japan’s Liberal Democratic Party which dominated Japanese politics for much of the post-war era.

Dr. Ding closed his presentation by discussing the implications of the election. It is likely, Dr. Ding argued, that Tsai Ing-wen will refrain from provoking Beijing, but that there will be continuing tension born out of the lack of mutual trust between the two parties. The DPP government is likely to reinforce Taiwan’s business ties with the U.S., and increasingly cut those with China. A divided business community in Taiwan is one probable result of this election.

Dr. Jerdén followed Dr. Ding’s presentation with comments on China’s likely perspective on the election and what to expect from Taiwan’s political forces going forward. Beijing’s approach so far, Dr. Jerdén said, has been one of trying to pressure Taiwan into accepting their wishes. This has largely backfired, but why is it that China seems unable to handle Taiwan in a way conducive to its interests? Dr. Jerdén argued that China’s political model is simply not attractive in Taiwan as a liberal, democratic Taiwanese identity has come to trump cultural ties with China. China’s approach is based on the flawed assumptions, in Dr. Jerdén view, that integration is inevitable and that it will happen because of increased economic linkages. This reveals a materialist view of society, where economic linkages take precedence over identity and values, which are very important in Taiwan at the moment.

Taiwan’s political forces have a few choices to make now. The KMT is at a crossroads. While Taiwan’s main benefactor in the world, the U.S., has changed a lot in how it sees China in the past three years, this is not true of the KMT. The party still maintains its ideas of co-existence and mutual dependence with China, a policy direction that lacks an audience in the U.S. and in the young Taiwanese electorate. The younger you are in Taiwan, the more critical you are of the KMT narrative, and as these youngsters grow-up they will gain further influence in politics. The KMT therefore needs to change its basic view of cross-strait relations. It is unclear if it can do that, Dr. Jerdén stated.

As for the DPP, the question is how Tsai Ing-wen will use her mandate. In recent speeches by Tsai Ing-wen, she has emphasized a few “musts” and a few “understandings”: China must recognize the existence of Taiwan and its system; it must respect Taiwan’s commitment to democracy and self-rule; the parties must solve cross-strait relations peacefully; and government agencies and not low-level officials must negotiate those relations. The “understandings”: China is the party undermining the status quo in cross-strait relations; China is using the 1992 consensus to undermine Taiwan; sovereignty cannot be exchanged for economic benefits; and China is infiltrating all layers of Taiwanese society. These musts and understandings suggest that Tsai Ing-wen’s government is trying to forge a path independent of old KMT principles, something which has not yet been accepted by her opponents, Dr. Jerdén concluded.

The Q&A session that followed the presentations touched upon, among other things, the domestic politics of Taiwan’s anti-infiltration law; pressure from the pan-blue and pan-green camps on their political leaders; and populism in Taiwan. ISDP would like to extend our warmest thanks to the speakers and all participants.