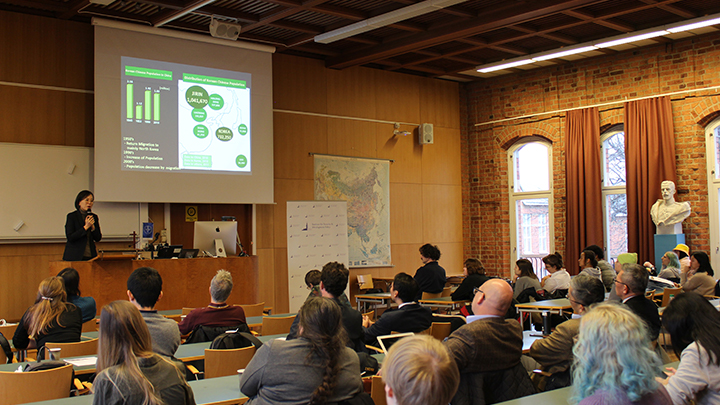 After a short introduction by Alec Forss, Project Coordinator at ISDP’s Korea Center, Dr. Kim Sung Kyung began her presentation on the field research she began in 2011 relating to the (changing) role of North Korean Women at the Sino-North Korean border. Dr. Kim described her work in the border region as challenging and sometimes even emotionally difficult, however, she was keenly interested in women’s stories and unique culture of those living in the border region. She relayed that one of her biggest concerns during her research was inadvertently jeopardizing the women’s safety, who for the most part lived in China illegally.

In her discussion about society and the context in which the women grew up in North Korea, Dr. Kim went into detail on the Juche Ideology, the official state ideology of North Korea. In a country where women are regarded as inferior and, in many regards, reduced to their role as mothers, the North Korean gender equality law has little impact.

Providing some historical background, Dr. Kim explained that in times of urgent need of labor to reconstruct society, particularly around 1960, as well as after the arduous march in the mid-1990s, women were regarded as revolutionary workers. However, the strong cultural norm of women as mothers whose main task was to educate their children and bring food to the table was a persistent stereotype. Motherhood was seen as a social duty and as the “most exemplary form of selfless public service”. Dr. Kim highlighted the image of the “ideal woman” by showing a video of the “chollima hero’s song”, which features an “ideal woman” working in the industry.

Dr. Kim offered further detail on the situation at the border between North Korea and its surrounding countries – China, Russia and South Korea. While enforcement measures at the various borders often changed, border control under the regime of Kim Jong-Un has become considerably stricter and therefore the number of North Korean citizens crossing the border illegally has decreased.

Dr. Kim also highlighted the increased feminization of North Korean migrants in the border region compared to other women in South Korea. Out of the estimated 33,500 people, who made the border crossing to South Korea between 1998 and 2019, 71 percent were women. The women interviewed felt like they had a much better life than the families they left behind and found pride in providing everything possible for their children.

Following her presentation, the floor was opened up for a Q&A session. Among her conclusive remarks, Dr. Kim made the point that she believed the situation of the North Korean women in the border regions to be a human rights issue.