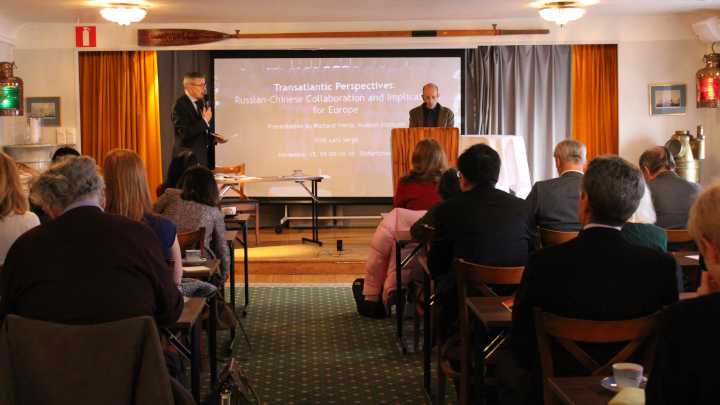 On November 15, 2019, ISDP organized the second event in our Transatlantic Perspectives speaker series, featuring Dr. Richard Weitz, Senior Fellow and Director of the Center for Political-Military Analysis at the Hudson Institute, Washington D.C. Dr. Weitz made a presentation on the topic of Russia-China collaboration and implications for Europe, followed by a Q&A session with the audience. The event was moderated by Dr. Lars Vargö, Distinguished Fellow at ISDP.

Dr. Weitz began his presentation by stating that relations between Moscow and Beijing are “the best they have ever been”. They have, however, not developed equally. This is particularly true in the economic sphere, where China’s power has grown much faster than that of Russia. In terms of defense cooperation, however, Beijing and Moscow have grown increasingly close in recent years.

In explaining how this defense cooperation came about, Dr. Weitz noted that bilateral arms trade between Beijing and Moscow started in the early 1990s, against the backdrop of Europe’s arms embargo on China after the Tiananmen Square protests. The collapse of the Soviet Union furthered accelerated this trend and sped up the export of Soviet/Russian weapons like combat aircraft and missile systems to China. However, as China’s own weapons development capability increased – largely as a result of copying the Soviet Union – the country stopped purchasing weapons systems from Russia in the late 90s. Due to Western sanctions imposed on Russia after the annexation of Crimea, bilateral arms deals have again increased in recent years.

China and Russia are now stepping up military cooperation, Dr. Weitz argued. The two countries have conducted joint military exercises bilaterally and multilaterally, collaborating with Shanghai Cooperation Council member states in Central Asia on issues like counterterrorism. Recently, Beijing and Moscow have been integrating their operations technologically and tactically, in extensive areas such as navy exercises, strategic air defense and missile defense operations. Joint statement and military official level talks also have been noticeable in recent years. However, when it comes to a military alliance, Moscow and Beijing has not signed any mutual defense treaty, and it is yet unclear whether they will extend the friendship agreement between the two countries set to expire in 2021.

In discussion arms control, Dr. Weitz  brought up the current U.S. administration’s aim to include China in arms control talks, something they have rejected. From the perspective of the U.S., it makes little sense to continue to sign missile reduction treaties with Russia but not with China especially as many officials in Washington see the latter rather than the former as the main long-term challenger to the United States and its allies.

One of the most significant examples of where the two are collaborating, according to Dr. Weitz, is Central Asia. Some assume that China and Russia play geopolitical competition in Central Asia, but in fact, they have successfully collaborated in order to maintain Russia’s security primacy in the region. China is reluctant to sell weapons to Central Asian countries, while Russia actively engages in arms sales in the region.

In East Asia, Moscow and Beijing co-exist with some sort of harmony, particularly relating to the Korea Peninsula.  They have supported each others’ plans for peace on the Peninsula which require North Korea to stop missile and nuclear tests and the U.S. to cease military exercises with South Korea. When it comes to territorial disputes, Russia has not fully recognized China’s claim on South China Sea and China has not fully recognized Russia’s claim on the southern Kurils. Russia also still sells land attack cruise missiles to Vietnam, China’s potential adversary. When it comes to the Arctic, Russia has been losing its footing economically after economic sanctions imposed on Russian business and as a result of Arctic states being concerned by Russia’s presence in the region. China, on the other hand, has toned down its political ambitions and  focused more on advancing into the region economically.

At the end of his presentation, Dr. Weitz highlighted that the Sino-Russian partnership is more of a military threat to the United States than to Europe. While President Trump initially tried a new approach with Russia in an attempt to improve deteriorated bilateral relations and to isolate Iran, the administration gained little domestic and international support for this. When it comes to China the U.S. has now been very critical across a range of issues including human rights abuses in Hong Kong and re-education camps in Xinjiang. However China does not, Dr. Weitz argued,  constitute the same threat to Europe as it does to the U.S. Even though China does not share liberal values with European countries, there is a gap between the U.S. and European threat perceptions with regard to China. The significance of Taiwan, for instance, is much higher on the U.S. agenda compared to that of Europe. Some European countries countries regard Russia as a core economic partner, which coupled with NATO internal tension and China-Russia defense cooperation poses a challenge to the U.S. and Europe in crafting an effective reponse to expanding Russia-China ties.

During the Q&A that followed Dr. Weitz’s presentation, several questions were raised by the audience, including the effect of the Russia-China relationship on Europe and personal relations between Vladimir Putin and Xi Jinping.

ISDP would like to extend our thanks to Dr. Weitz for his presentation and to the very active audience for participating.