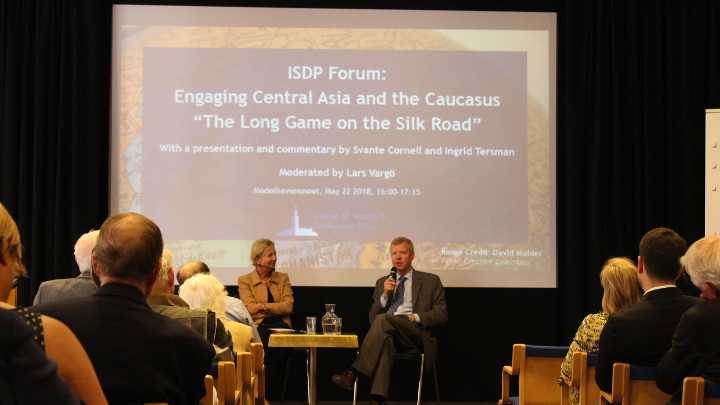 Dr. Cornell began by giving introductory remarks, pointing out that while EU and U.S. accomplishments towards Central Asia and the Caucasus are non-negligible, there are areas that can be improved. He stated that the significance of the region lies not only in its crucial geographical importance but also in the long-time Western presence. Dr. Cornell then explained Western countries’ interests in the region, stressing their desire of maintaining long-term peace and stability, secularism, as well as sharing Euro-Atlantic values and having a reliable transit corridor between the EU and Asia. He presented the different phases of the relation of the U.S. and Europe with Central Asia and the Caucasus, explaining how events such as the 9/11 terror attacks, the Russian-Georgian War and the global financial crisis influenced Western involvement in the region.

Dr. Cornell then gave a presentation of the book, stating that the main aim behind it was to provide a critical analysis of Western engagement with Central Asia and the Caucasus, as well as suggestions for practical improvements. He argued that the West has largely underestimated the challenges and existential threats that countries face in the region and rather shown a policy of disengagement. He also pointed out to the Western tendency of providing assistance as a reward for model “students” who embrace democracy and Human rights promotion. Dr. Cornell further stated that Western countries have mostly underestimated or ignored the secular forms of government in Muslim societies. As there is a possibility of witnessing the development of a Central Asian model in 10 to 20 years, he believes it is important to help those countries achieve their dreams instead of rejecting them. In his view, there is a strong need for institutional reform in parallel of the building up of the civil society in Central Asia and local elites need to be at the center of the reform process. Finally, among the structural problems that contribute to current shortcoming, he cited the lack of coordination and connection between bureaucratic entities in Central Asia.

The presentation was followed by remarks from Ms. Ingrid Tersman, Ambassador to Ashgabat, Baku, Dushanbe, Tashkent.

Ms. Tersman also stressed that the fight of sovereignty and security amongst Central Asian countries is not acknowledged enough by Western countries.

The way towards building governance and strong institutions is complex. She thus emphasized the need for countries and governments to be willing to take the cost of transition, which is not always the case. Ms. Tersman stated that governments need to be the ones driving the transition because when political will is present, a lot can be achieved. She nevertheless recognized that the civil society also has space in this change, as it makes a good contribution to the countries’ development and helps create resilient societies. The importance of democratic governance should also not be understated, especially to secure a stable environment for companies investing in the region.

Ms. Tersman asserted that while there is a strong policy coordination between the EU, U.S., and NATO in Central Asia, there is a need for coordination at a lower level. She believes the EU could assure a better coordination in that regard. In her view, whatever process is initiated the most important is that the engagement is reciprocated. The recipient country needs to coordinate with the EU. Moreover, the West needs to give strategic patience to those countries and be pleased by the small steps they have already taken. Ms. Tersman argued that civil societies in Central Asia want more involvement from the EU and increased dialogue. She cited several initiatives including such as forums, ministerial meetings, human rights and policy dialogue, active EU delegations and interlocuters. She believes Central Asian countries can benefit from experience sharing with the EU, in particular in the domain of governance. Ms. Tersman concluded by explaining why China cannot fill all the needs of the region.

The Forum ended with a Q&A session which included the following topics:

Watch the video from the Forum here.