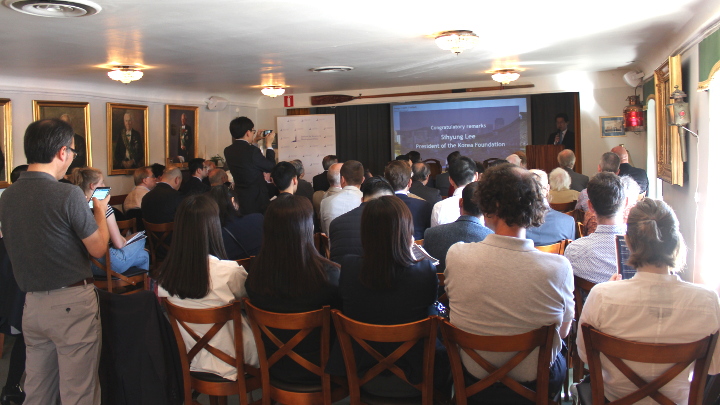 On May 15, 2018, ISDP held a forum at Sjöfartshuset in Stockholm, to mark the official launch of the Institute’s Korea Center. The inauguration was attended by ambassadors, government ministers and policy experts, all of whom have followed the progression of ISDP’s Korea focus over the last several years. To coincide with the launch, there followed a forum on the topic of “Nordic-Korea Cooperation for Peace and Development”, which included contributions by a number of expert speakers.

Introductory remarks were given by Dr. Sangsoo Lee, Senior Research Fellow at ISDP, who thanked the Korean Foundation for their support to the Center. Dr. Lee stated that we are witnessing an extremely crucial period of developments on the Korean Peninsula and that we should not underestimate our potential to contribute to the dialogue building process. He stated that the Center will aspire to be a focal point for research, dialogue, and exchange contributing to peace and stability on the Korean Peninsula, as well as promoting cooperation and understanding between the Nordic countries and South Korea. Dr. Lee believed that the forum topic of Nordic-Korea Cooperation was a salient issue worth building upon as there is much knowledge exchange that can be garnered from the two regions that would aid the process of peace and development.

Sihyung Lee, President of the Korea Foundation, stressed in his introductory remarks that the Panmunjom inter-Korean summit was the first step on the road to peace, though it was essential to keep the momentum of dialogue going and set a path to a sustainable peace. Following this, Jeongkyu Lee, Ambassador of the Republic of Korea to Sweden, gave his introductory speech in which he emphasized that next year will see the celebration of 60 years of diplomatic ties between Sweden and South Korea. He gave credit to Sweden’s contributory role in the successful inter-Korean Summit and made clear the potential for further trade and culture cooperation that could be established between South Korea and the Nordic countries.

This point was echoed by Henrik Bergquist, Head of Section, East Asia Department, Swedish Ministry for Foreign Affairs, as he mentioned the common history Sweden has shared with the region, in particular following its involvement in the original Neutral Nations Supervisory Commission (NNSC) from 1953. Mr. Bergquist stated that despite the geographical distance between them Nordic and Korean societies have a lot in common, in particular when it comes to trade, technology, smart cities and green solutions.

Lars Vargö introduced the discussion by noting that during his tenure as Swedish Ambassador to South Korea from 2006-11, there were highs and lows in relations on the peninsula as well as in the overall security climate. Dr. Vargö noted that this mirrored in many ways what we see happening today.

Annika Rembe made the point that there should be no complacency in the Nordic region in terms of their good current reputation in South Korea. This is especially true for younger people, who are often more difficult to engage with. Mrs. Rembe believed that connections could be made in terms of innovation, as South Korea is often ranked as leading the world in this category, with the Nordic countries also performing well. The more flexible working environment in places such as Sweden could offer lessons for Korea, given the very long hours, but lower productivity there. On gender equality, she stated that Scandinavia is an outlier in terms of women’s rights, which should be remembered in assessing the situation in South Korea. On education in particular, female attainment was often higher than for males in many countries, but that this edge was lost in the workplace, leading to negative economic consequences.

Kijoung Cho spoke of the like-minded nature of Korea and the Nordic countries and that they shared many values. He stressed the importance of his country’s strategic relationship with the EU, and that much could be done to further strengthen ties. Mr. Cho felt there were joint lessons that both societies could absorb in terms of productivity and decision making. He made the point that, trade has rapidly expanded between the Nordic countries and South Korea, with the free trade agreement with the EU improving relations further. On gender equality, he said there was still much to learn for South Korea but that his experience of the diplomatic service was that women were increasingly well represented.

Geir Helgesen pointed to the relatively smaller size of each of the Nordic countries, but that if they worked together, they could achieve a lot. He believed that, although there were obviously a number of differences between them, the dissimilarities could in fact be used to build closer connections. His experience in Korea was that people quickly set their mind to tasks once they had made a decision, which he found to be the opposite tendency in Scandinavia. Dr. Helgesen stated that a significant difference between the two regions was that of social/professional hierarchy, with Nordic countries, in the majority, avoiding the use of the system, whereas in Korea it being a very prominent feature of society. Therefore, he believed that achieving gender equality might be tougher as a result.

The panel concluded with a Q&A session which covered the following issues:

The second panel discussion, “Prospects of Peace on the Korean Peninsula”, was moderated by Per Eklund, ISDP Board Member and Senior Research Fellow. The panelists included:

Per Eklund opened the panel discussion through stating that the situation on the Korean peninsula has undergone a dramatic change from tensions to a rapprochement, with the planning of high level meetings. The speakers were encouraged to give their explanations on the reasons for this sudden rapprochement and explain the willingness of both sides to negotiate.

Dr. Françoise Nicolas, Senior Research Fellow and Director, Center for Asian Studies at The French Institute of International Relations (IFRI), stated that the drivers for rapprochement are multiple. In her view, the economic sanctions and the pressure from an unpredictable Trump administration were of particular importance. She noted that President Moon also played a significant role in facilitating dialogue by showing a real willingness to act. She expressed skepticism at the denuclearization promise, as North Korea has not clearly stated what the term entails. For instance, it could mean the denuclearization of sites that are technically already out of usage or even a total denuclearization of the peninsula for all sides, including the for the U.S. Dr. Nicolas believes that the meeting will reveal those difficulties and, therefore, there is a high risk that it will result in a deadlock situation.

Dr. Mark Suh, Senior Researcher at the Free University of Berlin, also recognized the role played by president Moon in the rapprochement. He explained that the leader’s upbringing in a North Korean refugee family had made him more sensitive to the situation and contributed to his willingness to act and prevent conflict on the Korean peninsula. He stressed the fact that president Moon’s declaration that there will be no regime change and no more hurried reunification policy was crucial in bringing the DPRK at the negotiation table. Dr. Suh, pointed out that South Korea’s willingness to accept the DPRK and help the country instead of just waiting for it to collapse marks an important change and offers positive prospects. Finally, he stated that while achieving peace will be long process, signing a peace agreement to end the Korea war is the first step towards stability. Then only the U.S. and China should be involved in the negotiations.

Dr. Niklas Swanström, Executive Director of ISDP, expressed the view that the pressures from the Trump administration were quite effective compared to prior economic sanctions. He pointed out that the negotiations were aided by the fact that, for the first time, North Korea engaged in a conversation in which it saw itself as an equal. He stated, however, that the DPRK is unlikely to give up nuclear weapons unless it has irrefutable proof of protection from the U.S. Security and normalization are essential to provide the DPRK with enough security insurance to engage in a denuclearization process. In his view, President Trump will thus have to compromise hard, but it is difficult to assess if he will, given his unpredictable behavior. Dr. Swanström further added that the scrapping of the Iran deal poses a real challenge to reaching a significant agreement with Pyongyang, as it will be difficult to offer a better proposal. He then emphasized the need for a step-by-step approach, because even if an agreement is reached it will take years to dismantle all the nuclear facilities and weapons. Moreover, the question of how to deal with the human capital involved in nuclear activities will be an important problem. Dr. Swanström concluded by stating that the U.S. needs to acknowledge the fact that the path towards denuclearization is long and cannot be hurried through.

The panel ended with a Q&A session that covered the following topics: