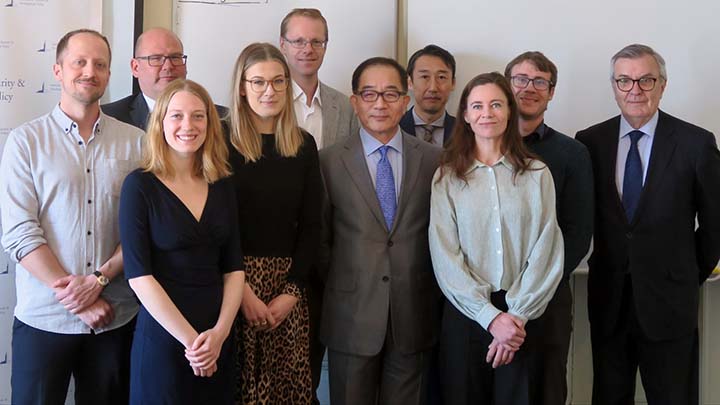 Last week, the ISDP Stockholm Korea Center welcomed six journalists from the Nordic countries to a first in-depth session on South Korea as part of the ISDP-KF Nordic Journalist Fellowship Program, which was initiated together with the Korea Foundation.

In the last two decades, South Korea has become one of the strongest middle powers on the globe and holds a special position in Asia as one of the major promoters of democratic values, sustainable development, green technologies, and gender equality. Additionally, South Korea’s profile has been quickly spreading throughout the globe thanks to the rise of the Korean wave, including K-entertainment (pop, drama, film), language, and cuisine.

In many ways, South Korea has gained a similar country image to the Nordic countries, as a high-tech, innovative and moral superpower on the other side of the Eurasian continent. However, South Korea’s image as a bustling middle-power is not very present in the Nordic media, as the country’s development is constantly overshadowed by the North Korean nuclear issue.

Greater awareness and a more balanced knowledge of South Korea

To promote greater awareness and a more balanced knowledge of South Korea, the Korea Foundation and the ISDP Stockholm Korea Center launched the Nordic Journalist Fellowship Program. The first training session took place last week (May 2-5) and invited six journalists from the Nordic countries (Sweden, Denmark, and Finland) to travel to Stockholm to attend lectures and gain insights about South Korea’s history, culture, and political situation.

The journalists were welcomed by ISDP’s Executive Director Niklas Swanström and the Deputy Director and Head of the Korea Center Sangsoo Lee as well as by the President of the Korea Foundation Geun Lee. Throughout the three days, the Fellows were able to attend several interesting lectures by professors and experts from South Korea and Sweden on diverse issues concerning South Korea and the Korean Peninsula. The eight lectures during this first session of the Fellowship Program covered topics including Korea’s history and culture, the political and security landscape of South Korea, as well as economic, social, and sustainable developments. During a visit to the Embassy of the Republic of Korea to the Kingdom of Sweden, the journalists were able to meet and attend a lecture by South Korea’s ambassador H.E. Ha Tae-youk. The first training session was concluded by an engaging and fruitful roundtable discussion on the outcomes and learnings of the week as well as expectations for the remaining program.

In June, the Fellows will go on a field trip to Seoul, South Korea, where they will have the opportunity to get to know the country, and meet experts, policymakers, politicians, and fellow journalists. The second training session will be held in Stockholm in September, offering more in-depth lectures on the Korean Peninsula.