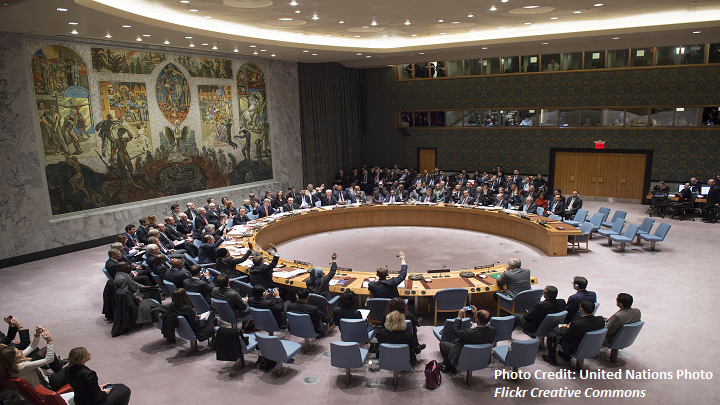 On September 11, the UN Security Council unanimously adopted Resolution 2375 (2017), which strengthens sanctions on North Korea in response to its nuclear test conducted on September 3. ISDP’s Korea Project answers some key questions on the implications of the latest sanctions.

How tough are the latest sanctions?

These are the toughest sanctions to date but they do have significant limitations. While the Trump administration had wanted to ban all oil imports into North Korea, instead a cap of 2 million barrels per year of refined petroleum products, starting next January, was agreed to. While this represents a significant cut, it is estimated by the Nautilus Institute that North Korea has stockpiled energy reserves for at least a year and that it has reportedly reduced its oil consumption.

Furthermore, the bans on North Korean textile exports and imposition of restrictions on North Korean labor abroad – two key sources of foreign revenue for the regime – are arguably the easiest to breach. Textile exports could continue to some extent through illegal trade on the border. It also remains to be seen how rigidly the non-authorization of work permits to North Korean nationals will be upheld.

It is also questionable how thorough inspections of cargo at ports and at sea will be. North Korea is well-versed in evading such inspections, while successful interdiction of banned products will depend on stringent implementation of sanctions, above all by China. So far North Korea has been able to exploit loopholes. Finally, the resolution did not include a freeze on Kim Jong Un’s assets, despite Washington lobbying for such. Despite all the above, the sanctions do represent an intensification of pressure on Pyongyang.

Will they be enough to deter future missile and nuclear tests by North Korea?

It is doubtful. As noted above, the sanctions have limitations. North Korea furthermore likely anticipated the latest increase in sanctions. The regime has also proven itself very adept in finding a way to circumvent sanctions and by using illegal means. While the sanctions do put an extra squeeze on North Korea, the country’s domestic economy has in fact shown signs of tentative recovery in recent years, made by introducing modest market economic reforms.

The fact is that Pyongyang’s missile and nuclear programs are an overriding priority for the regime. In fact, its nuclear status was enshrined in the country’s constitution in 2016. Instead, North Korea is likely to conduct more tests to further develop its programs and demonstrate its capacity. This also serves the aim of maximizing its leverage with the United States if and when negotiations do resume. However, the acceleration of its programs could indicate that it is worried about the impact of toughening sanctions on its economy in the long term. This shows it may be aiming to complete its programs as soon as possible.

Does the resolution show increasing consensus between the U.S. and China in dealing with North Korea? What differences remain?

Compared to previous resolutions, the new resolution was adopted very quickly, coming just one week after North Korea’s nuclear test on September 3. That the five members of the Security Council were able to agree on tougher sanctions within such a short timeframe indicates that China and Russia are increasingly alarmed by North Korea’s actions. However, that the sanctions were “watered down” reflects Russia’s and, even more so, China’s concerns about destabilizing North Korea. China especially seeks to pursue a fine line between adopting punitive pressure but not going so far as to risk triggering a potential collapse – something which would not be in its interests.

There are also important differences in approaches to the nuclear issue. Both China and Russia stress the need for dialogue and compromise, with Putin even having branded sanctions as “useless.” China views much of the current situation as being the fault of the United States, arguing that it directly negotiate with Pyongyang and provide necessary security assurances, while the United States and others put stock in China to assert its leverage, primarily through economic means, to bring Pyongyang to heel. That they see each other as primarily bearing responsibility thwarts effective coordination. Ultimately, Pyongyang exploits the political and geo-political differences between the major powers to maintain its programs.

Members of the Security Council also called for the Six-Party Talks to be resumed on denuclearization. How likely is this?

Not very likely, at least in the short term. North Korea is not interested in any dialogue where the main item for discussion would be its denuclearization. Instead, it sees itself as a nuclear power and that future negotiations should be conducted with this in mind towards signing a peace treaty. The United States and South Korea are also skeptical about the resumption of serious negotiations unless North Korea makes a prior commitment to denuclearization. China and Russia have called for a resumption of negotiations on the basis of a freeze on North Korea’s nuclear and missile tests in return for a suspension of U.S.-South Korea joint military exercises. This has so far been rejected by both Washington and Seoul.

The views expressed here do not necessarily reflect those of ISDP or its sponsors.