Video and Summary of the ISDP Forum “Has Abenomics Failed? Where is the Japanese Economy Heading?” 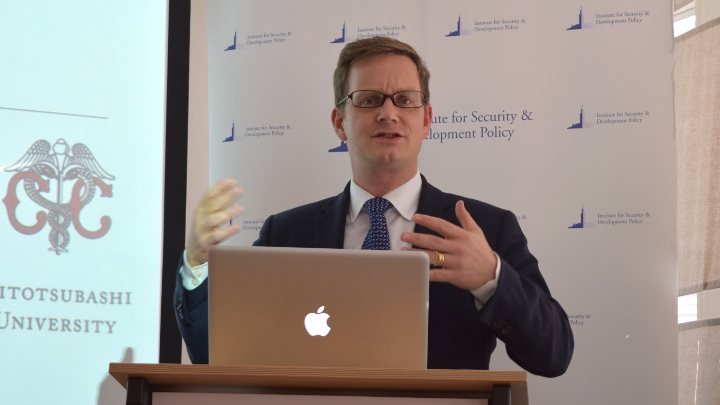 On October 20th, the Institute for Security and Development Policy welcomed Professor Jesper Edman from Hitotsubashi University and Professor Marie Söderberg, Director of the European Institute for Japanese Studies at the Stockholm School of Economics, to discuss the impact and future of “Abenomics” – the economic policies promoted by Japanese Prime Minister Shinzo Abe.

Abenomics consists of three “arrows”; monetary easing, fiscal policy and growth policies. The program has been criticized for its supposed lack of success, something that Prof. Edman partly agreed with. He referred to a number of issues, such as that the target for inflation of 2% has not been reached, and that some parts of the third arrow have not been realized or are not doing well – such as the stumbling TPP agreement. Prof. Edman also pointed out that only 25% of Japanese people see Abenomics affecting them personally – a troubling sign, as the program is not only about economy, but a form of psychotherapy to strengthen Japanese people’s trust in the nation, and to make households and companies spend more.

In short, Prof. Edman considered that the first arrow met its target, though bounced off it, while the second fell short. However, he considered the third – and most important – to still be up in the air. According to Prof. Edman, demographics is what matters most to the Japanese economy, and there are implications of upcoming change, such as the globalization of Japanese firms, labor force revolution and shifts in economic structure. Hence, it is too early to say that Abenomics has failed, despite not having changed a lot.

Prof. Marie Söderberg added some comments toward the end, stressing that there is still much to be done if Abenomics is to become a success story – for example, the prevailing underrepresentation of female labor and skepticism toward foreigners in Japan.

ISDP thanks our speakers and all members of the audience for contributing to a very interesting discussion.