Video and Summary of the ISDP Forum “US Foreign Policy: After the Election” 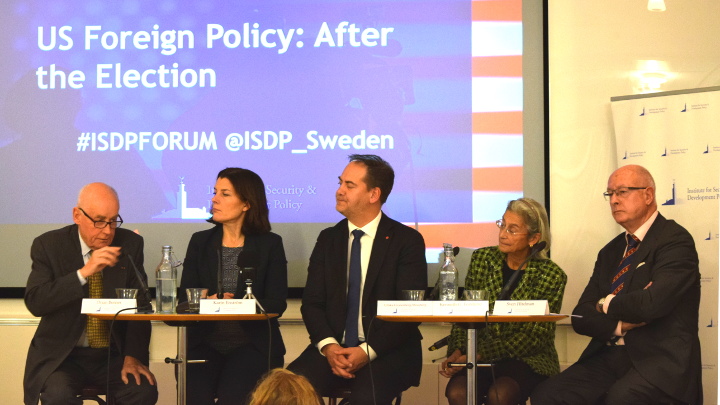 On November 24th, the Institute for Security and Development Policy held a forum titled “US Foreign Policy: After the Election.” To discuss the subject, a panel of experienced Swedish diplomats and politicians gave their opinions on the result of the recent elections and the impact that it may have on international politics.

Lars Vargö, Distinguished Fellow of ISDP, welcomed the five expert panelists; Örjan Berner, Former Ambassador to India, Poland, Russia, Germany and France, Ulrika Cronenberg-Mossberg, Former Senior Advisor on Development Policy and Africa, and former Ambassador of Sweden to Lithuania and Macedonia, Karin Enström, Deputy Chair of the Committee on Foreign Affairs and former Swedish Minister for Defence, Kenneth G. Forslund, Member of the Swedish Parliament, and Chair of the Committee on Foreign Affairs, and Sven Hirdman, Former State Secretary in the Swedish Ministry of Defence, and Ambassador to Israel and Russia.

Kenneth G. Forslund stressed how Sweden’s foreign policy must continue to center on its liberally progressive values despite the shift in the Western political spectrum. Donald Trump’s threats to free trade could hurt Sweden if pursued. However, since such policies would also have a negative impact on the U.S, Mr. Forslund, concluded that it would be unlikely for him to pursue these policy ideas.

Karin Enström emphasized that the inconsistency of Trump and the u-turns he has already made highlight a dangerous pattern. Regarding NATO in particular, even though it is highly-unlikely that the US will break from the alliance, whilst campaigning Trump made statements that certainly questioned NATO’s legitimacy.

Ulrika Cronenberg-Mossberg made the point that we may see a more isolationist U.S which is concerned less with the humanitarian efforts of the U.N and more focused on rapid nation building. Sweden will continue with their foreign policy no matter what shifts the U.S makes and if there is a withdrawal in development funding, Sweden will be one of the countries that will foot the bill.

Sven Hirdman believes there will be a reset in US-Russia relations and this could ease international tensions. We may see Trump allowing Russia to continue their support for the Assad regime without U.S interference in the region. Hirdman stated that there may well be problems stemming from this but we should welcome any lowering of tensions between the two superpowers.

Örjan Berner stated that Trump’s presidency could lead to a volatile political situation in the Baltic states. The U.S has historically been essential for the security of Estonia, Latvia and Lithuania. If a situation arises, similar to that in Crimea, where Russian intervention is required because of ‘civil unrest’, then it is not certain whether the U.S and thereby NATO will respond.

ISDP would like to thank the five expert panelists, as well as the audience for their participation in what was an enlightening discussion on a topic of high importance.