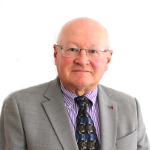 Army Colonel (ret.) Jan Mörtberg is a member of the ISDP Board. Among other assignments, Col. Mörtberg has served in UN missions in Sinai (1974-75), Cyprus (1981), Lebanon (1987-88), Afghanistan (1988), and Iraq-Kuwait (1991). He has been the Commander of Norrbotten Regiment, and before that a Senior Advisor at the Ministry of Defence. He has also held several positions at the Swedish Defence University, his last assignment there being Head of the university’s Department of Security, Strategy and Leadership. Mr. Mörtberg is a member of the Royal Swedish Academy of War Sciences where he is Chair of Section 1, Land Warfare Studies.