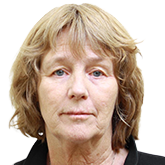 Lena Sundh is a retired Swedish diplomat who has also served in the UN. She has i.a been the ambassador to Angola, the Special Envoy of Sweden to the Africa Great Lakes region and a counsellor for political affairs at the Swedish Mission to the UN in New York. She has also served as the Deputy Special Representative of the UN Secretary General to the Democratic Republic of Congo, as the head of the Office of the UN High Commissioner for Human Rights in Nepal and as the chair of the International Commission of Inquiry for Mali.