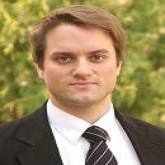 Niklas Nilsson is a Research Fellow with the Joint Center, and Coordinates the Network of European Studies at Uppsala University’s Department of Government. He holds a Ph.D. Degree in Government from Uppsala University, as well as an M.A. in Political Science from Lund University and has studied Post-Communist Transitions in Eastern Europe at Budapest University of Economic Sciences and Public Administration. He has also pursued Russian language studies at Stockholm and Uppsala Universities. He has previously served as a guest researcher at the Georgian Foundation for Strategic and International Studies, Tbilisi, and at the Elliott School of the George Washington University. His Ph.D. Dissertation was entitled Beacon of Liberty: Role Conceptions, Crises and Stability in Georgia’s Foreign Policy, 2004-2012.

Dr. Nilsson is Associate Editor of the Central Asia – Caucasus Analyst and conducts research on the Caucasus and the Wider Black Sea Region, with a specific focus on international politics, conflict, and energy security.